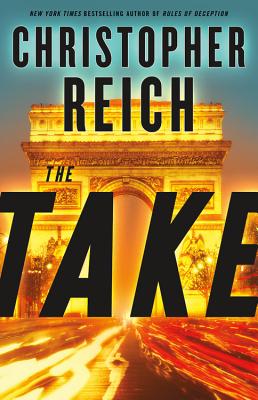 By Christopher Reich
Email or call for price
Hard to Find

This is book number 1 in the Simon Riske series.

Riske is a freelance industrial spy who, despite his job title, lives a mostly quiet life above his auto garage in central London. He is hired to perform the odd job for a bank, an insurance company, or the British Secret Service, when he isn't expertly stealing a million-dollar watch off the wrist of a crooked Russian oligarch.

Riske has maintained his quiet life by avoiding big, messy jobs; until now. A gangster by the name of Tino Coluzzi has orchestrated the greatest street heist in the history of Paris: a visiting Saudi prince had his pockets lightened of millions in cash, and something else. Hidden within a stolen briefcase is a secret letter that could upend the balance of power in the Western world. The Russians have already killed in an attempt to get it back by the time the CIA comes knocking at Simon's door.

Coluzzi was once Riske's brother-in-arms, but their criminal alliance ended with Riske in prison, having narrowly avoided a hit Coluzzi ordered. Now, years later, it is thief against thief, and hot on their trail are a dangerous Parisian cop, a murderous Russian femme fatale, her equally unhinged boss, and perhaps the CIA itself.

In the grand tradition of The Day of the Jackal and The Bourne Identity, Christopher Reich's The Take is a stylish, breathtaking ride.

Christopher Reich is the New York Times bestselling author of Numbered Account, Rules of Deception, Rules of Vengeance, Rules of Betrayal, The Devil's Banker, and many other thrillers. His novel The Patriots Club won the International Thriller Writers award for Best Novel in 2006. He lives in Encinitas, California.

"Make sure your seat belt is fastened and your tray table is up, this is one hard and fast battle royale. Tension, turmoil, and drama ooze from every page. There's not a wasted word in this high octane game-changer."
—Steve Berry, #1 bestselling author of The Lost Order and The Patriot Threat

"A fast, wild ride with no less than the balance of power in the Western world at stake."
—Parade, Books We Love

"The Take is a slick, elegant, and gripping spy thriller of the first order. With a brilliant heist, a twisting web of secrets and intrigue, and an adrenaline-fueled plot, Reich whisked me out of my world and into his from the explosive first pages. Simon Riske is my favorite kind of hero--flawed, dark, and utterly intriguing. Fabulous!"—Lisa Unger, New York Times bestselling author of The Red Hunter

"A beautifully constructed heist is only the beginning of this spectacular thriller, which sets thief vs. thief, spy vs. spy, and even cop vs. cop. The Take is dazzling fun that surprises to the last page, with a hero who deserves an encore."—Joseph Finder, New York Times bestselling author of The Switch and Judgment

"There's plenty of action, interesting bits of tradecraft, and well-sketched locales in London, Paris, and Marseille. Best of all is Reich's succinct prose style."
—Booklist

"The Take is impossible to put down: non-stop action, a mysterious letter, and a fascinating, complicated, and sexy hero whose tool bag of wit and strength help him fight his way through the dangerous back alleys of glittering European capitals. An engrossing thriller."—Christina Kovac, author of The Cutaway

"An out-of-control joyride for those who like their heroes flawed, scarred, and on the edge. Reich has created an irresistible character that will leave readers both wincing and cheering with every page."
—Kyle Mills, #1 bestselling author of Fade and Rising Phoenix
My Account • Sign In • Sign Out • Register
NEW & USED BOOKS
AUTHOR EVENTS • GIFTS
Tempe
6428 South McClintock Drive
480.730.0205
[Google Map]
10am-7pm daily
Trade Counter 11am-6pm daily