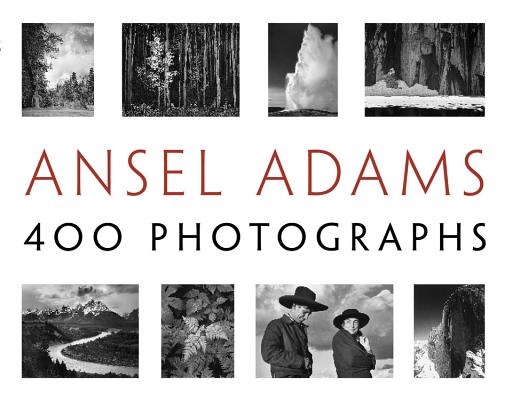 Ansel Adams: 400 Photographs presents the full spectrum of Adams' work in a single volume for the first time, offering the largest available compilation from his legendary photographic career. Beautifully produced and presented in an attractive landscape trim, Ansel Adams: 400 Photographs will appeal to a general gift-book audience as well as Adams' legions of dedicated fans and students.

The photographs are arranged chronologically into five major periods, from his first photographs made in Yosemite and the High Sierra in 1916 to his work in the National Parks in the 1940s up to his last important photographs from the 1960s. An introduction and brief essays on selected images provide information about Adams' life, document the evolution of his technique, and give voice to his artistic vision.

Few artists of any era can claim to have produced four hundred images of lasting beauty and significance. It is a testament to Adams' vision and lifetime of hard work that a book of this scale can be compiled. Ansel Adams: 400 Photographs is a must-have for anyone who appreciates photography and the allure of the natural world.

Ansel Adams (1902 - 1984) was the most honored American photographer of the twentieth century. Through the exhibition and publication of his work, his writings, and his leadership in the Sierra Club, Adams was also a prescient and highly effective voice in the fight to preserve America's remaining wilderness.

Andrea G. Stillman, who worked with Adams in the 1970s, has edited several books of his photographs and writings, including Letters And Images: 1916-1984, Our National Parks, and Ansel Adams in Color.

"a book that is certain to offer inspiration for years to come" —Shutterbug magazine, 2007