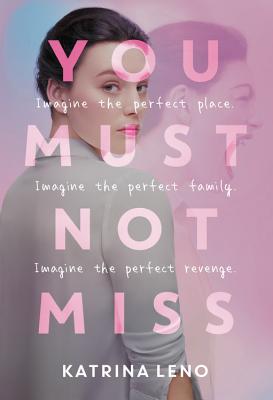 By Katrina Leno
$17.99
Not Available In-Store - Usually Ships from Warehouse in 1-5 Days

One of Us Is Lying meets Carrie in this suspenseful story of friendship, family, and revenge.
Magpie Lewis started writing in her yellow notebook the day after her family self-destructed. The day her father ruined her mother's life. The day Eryn, Magpie's sister, skipped town and left her to fend for herself. The day of Brandon Phipp's party.
Now Magpie is called a slut in the hallways of her high school, her former best friend won't speak to her, and she spends her lunch period with a group of misfits who've all been as socially exiled as she has. And so, feeling trapped and forgotten, Magpie retreats to her notebook, dreaming up a magical place called Near.
Near is perfect - a place where her father never cheated, her mother never drank, and Magpie's own life never derailed so suddenly. She imagines Near so completely, so fully, that she writes it into existence, right in her own backyard. At first, Near is a peaceful escape, but soon it becomes something darker, somewhere nightmares lurk and hidden truths come to light. Soon it becomes a place where Magpie can do anything she wants...even get her revenge.
You Must Not Miss is an intoxicating, twisted tale of magic, menace, and the monsters that live inside us all.

Katrina Leno was born on the east coast and currently lives in Los Angeles. She is a photographer and the author of five books -- The Half Life of Molly Pierce, The Lost & Found, Everything All At Once, The Summer of Salt, and You Must Not Miss. You can visit her online at katrinaleno.com

Praise for You Must Not Miss:
A 2020 CCBC Choice
* "Leno (Summer of Salt, 2018, etc.), channeling early Stephen King at his best, offers no neat conclusions, and her frank examination of depression, grief, alcoholism, and the ruinous aftermath of sexual assault, is grim yet effective. Readers will ponder this exceedingly creepy gut punch of a tale long after turning the last page."
—Kirkus Reviews (starred review)

* "Leno (Summer of Salt, 2018) takes a concept...and executes it with beautiful, brutal precision. Between the lines of spare and dreamlike prose lurks a girl who, though quiet at first, demands to be seen, and readers will not soon forget her."
—Booklist (starred review)

"This unusual blend of realistic fiction, fantasy, and mayhem begs debate wherever it is read! Stock more than one copy."
—VOYA

"A little bit Coraline, a little bit Stephen King.... A frank, unflinching look at grief, rage, depression, and how pain manifests as cruelty. You must not miss You Must Not Miss."—Mackenzie Vanengelenhoven, King's English Bookshop (Salt Lake City, UT)