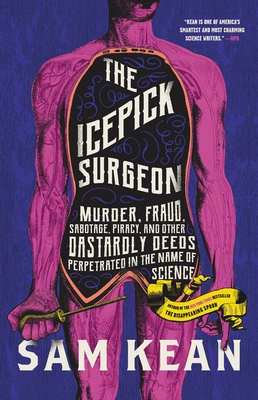 Science is a force for good in the world—at least usually. But sometimes, when obsession gets the better of scientists, they twist a noble pursuit into something sinister. Under this spell, knowledge isn’t everything, it’s the only thing—no matter the cost. Bestselling author Sam Kean tells the true story of what happens when unfettered ambition pushes otherwise rational men and women to cross the line in the name of science, trampling ethical boundaries and often committing crimes in the process.

The Icepick Surgeon masterfully guides the reader across two thousand years of history, beginning with Cleopatra’s dark deeds in ancient Egypt. The book reveals the origins of much of modern science in the transatlantic slave trade of the 1700s, as well as Thomas Edison’s mercenary support of the electric chair and the warped logic of the spies who infiltrated the Manhattan Project. But the sins of science aren’t all safely buried in the past. Many of them, Kean reminds us, still affect us today. We can draw direct lines from the medical abuses of Tuskegee and Nazi Germany to current vaccine hesitancy, and connect icepick lobotomies from the 1950s to the contemporary failings of mental-health care. Kean even takes us into the future, when advanced computers and genetic engineering could unleash whole new ways to do one another wrong.

Unflinching, and exhilarating to the last page, The Icepick Surgeon fuses the drama of scientific discovery with the illicit thrill of a true-crime tale. With his trademark wit and precision, Kean shows that, while science has done more good than harm in the world, rogue scientists do exist, and when we sacrifice morals for progress, we often end up with neither.

Sam Kean is the New York Times bestselling author of The Bastard Brigade, Caesar's Last Breath (the Guardian's Science Book of the Year), The Tale of the Dueling Neurosurgeons, The Violinist's Thumb, and The Disappearing Spoon. He is also a two-time finalist for the PEN / E. O. Wilson Literary Science Writing Award.

His work has appeared in The Best American Science and Nature Writing, The New Yorker, The Atlantic, and the New York Times Magazine, among other publications, and he has been featured on NPR's Radiolab, All Things Considered, Science Friday, and Fresh Air. His podcast, The Disappearing Spoon, debuted at #1 on the iTunes science charts. Kean lives in Washington DC.

“Delightful, highly readable… Kean takes his readers on an engrossing — and sometimes horrifying — historical tour of the many ways the search for knowledge can go wrong… Written with the flair of a beach thriller and the thoughtfulness of philosophy, the pages explode with a wealth of information and juicy details, all held together with virtuoso storytelling.”—Lucinda Robb, Washington Post

“The Icepick Surgeon has its gems of phraseology… We cringe at the ghastly work of grave robbers and surgeons in blood-stiff aprons, and laugh at the comical fights among paleontologists bent on destroying one another’s careers… As each chapter compounds, it becomes more difficult to condemn and smirk without seeing the systemic ways that early sins have crept into the heart of science and medicine today… It takes honesty and integrity to make good science; we ignore this at our peril.”—Brandy Schillace, Wall Street Journal

“Fascinating… Imagine a novel full of true crime thrillers with just one twist—every crime in it was committed in the name of science. This is the premise of the new book, The Icepick Surgeon… From Cleopatra to Thomas Edison, scientists have been responsible for some dastardly crimes throughout history.”—Ira Flatow, NPR Science Friday

“Vivid… [The Icepick Surgeon] serves as an important reminder that science is ever a human enterprise… Kean’s talent for spinning a delightful tale shines.”—Deborah Blum, Science

"The title alone is enough to make one buy this book! Kean is a funny and facile writer who proves that facts are indeed stranger than fiction. His tales of slavery, graverobbing, experiments, killing, and mayhem are not for the squeamish. But I dare you to put the book down once you start it."—Lawrence De Maria, Washington Independent Review of Books

“Catalogs some of the greatest ethical lapses done in the name of science… The Icepick Surgeon probably raises more questions than it answers. But that’s a hallmark of good experiments—as well as good books about science and scientists.”—Diana Gitig, Ars Technica

“Entertaining and chilling... Expert at spinning historical science yarns… Kean excels at conveying each scientist’s slide into corruption—one so gradual that, like the fabled boiling frog, they scarcely noticed they were in hot water.”—Elizabeth Svoboda, Undark

“Fascinating… Kean argues convincingly that what makes his subjects unique in the annals of crime is that they did wrong ‘for data—to augment our understanding of the world.’ This engrossing look at crimes often committed by otherwise moral people deserves a wide readership."—Publishers Weekly (starred review)

“Kean [has a] gift for making science understandable. His writing style is conversational and witty—but he never forgets the real human costs of these crimes.”—Deborah Mason, Bookpage

“[An] interesting discussion of the meaning of true progress and its cost is a thoughtful look through history and into the future.”—Cassie Gutman, Bookriot

“Kean’s strength lies in his storytelling, and in the humane combination of humor and compassion toward the strange life histories he pieces together.”—Columbus Dispatch