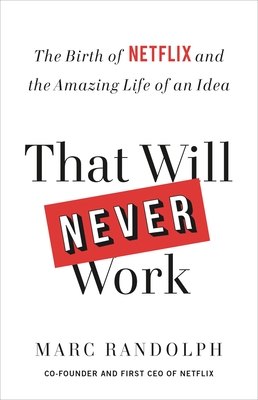 “An engaging read that will engross any would-be entrepreneur” (Wall Street Journal), now updated with a new afterword by the author: In the tradition of Phil Knight's Shoe Dog comes the incredible untold story of how Netflix went from concept to company — all revealed by co-founder and first CEO Marc Randolph.

Once upon a time, brick-and-mortar video stores were king. Late fees were ubiquitous, video-streaming unheard was of, and widespread DVD adoption seemed about as imminent as flying cars. Indeed, these were the widely accepted laws of the land in 1997, when Marc Randolph had an idea. It was a simple thought—leveraging the internet to rent movies—and was just one of many more and far worse proposals, like personalized baseball bats and a shampoo delivery service, that Randolph would pitch to his business partner, Reed Hastings, on their commute to work each morning.

But Hastings was intrigued, and the pair—with Hastings as the primary investor and Randolph as the CEO—founded a company. Now with over 150 million subscribers, Netflix's triumph feels inevitable, but the twenty first century's most disruptive start up began with few believers and calamity at every turn. From having to pitch his own mother on being an early investor, to the motel conference room that served as a first office, to server crashes on launch day, to the now-infamous meeting when Netflix brass pitched Blockbuster to acquire them, Marc Randolph's transformational journey exemplifies how anyone with grit, gut instincts, and determination can change the world—even with an idea that many think will never work.

What emerges, though, isn't just the inside story of one of the world's most iconic companies. Full of counter-intuitive concepts and written in binge-worthy prose, it answers some of our most fundamental questions about taking that leap of faith in business or in life: How do you begin? How do you weather disappointment and failure? How do you deal with success? What even is success?

From idea generation to team building to knowing when it's time to let go, That Will Never Work is not only the ultimate follow-your-dreams parable, but also one of the most dramatic and insightful entrepreneurial stories of our time.

Marc Randolph is a veteran Silicon Valley entrepreneur, advisor, and investor, whose career as an entrepreneur spans four decades. In addition to being the co-founder and first CEO of Netflix, Marc has founded or co-founded six other successful startups, mentored hundreds of early-stage entrepreneurs, and as an investor has helped seed dozens of successful tech ventures (and just as many unsuccessful ones). He is host of the top-10 Apple podcast That Will Never Work, where he works directly with entrepreneurs to provide 1-on-1 mentoring. He lives in Santa Cruz, California.

"Netflix was built on the vision and creative DNA of one man — Marc Randolph. As the founding CEO, his leadership defined the culture of Netflix and laid the groundwork for successive, global revolutions in how we make and consume entertainment. His willingness to step aside so that his co-founder Reed Hastings could scale up the company stands as an example of humility and self-knowledge that is rare in the startup world."—Gina Keating, author of Netflixed: The Epic Battle for America's Eyeballs

"Marc is an unusually brave
soul. Marc's genius in recognizing that not knowing frees you to experiment and
observe and to ultimately win."—Lloyd Tabb, founder ofLooker

"Marc wastes no time cutting
through the noise and identifying the truth. Every moment I have spent with
Marc, whether it was as he formulated and launched Netflix or since then, has
been truly rewarding. Marc understands what is important whether it is your
product, your marketing, or your business plan. A remarkable and one of a kind
visionary."—Mitch Lowe, founder of RedBox

"An entertaining
chronicle of creativity, luck, and unflagging perseverance."—Kirkus