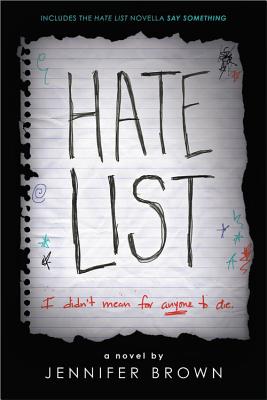 “After a school shooting perpetrated by her boyfriend, Valerie is all at once seen as a hero, a victim, and a co-conspirator. You will be swept up in the torrent of emotions felt by all of the characters, and, although the story sometimes will push you to the edge of your comfort zone, feeling Val's catharsis shows that even after the most violent of tragedies, good (or at least a semblance of normalcy) can blossom.”
— Lauren Schulte, Books & Company, Oconomowoc, WI

For readers of Marieke Nijkamp's This Is Where It Ends, a powerful and timely contemporary classic about the aftermath of a school shooting.

Five months ago, Valerie Leftman's boyfriend, Nick, opened fire on their school cafeteria. Shot trying to stop him, Valerie inadvertently saved the life of a classmate, but was implicated in the shootings because of the list she helped create. A list of people and things she and Nick hated. The list he used to pick his targets.

Now, after a summer of seclusion, Val is forced to confront her guilt as she returns to school to complete her senior year. Haunted by the memory of the boyfriend she still loves and navigating rocky relationships with her family, former friends, and the girl whose life she saved, Val must come to grips with the tragedy that took place and her role in it, in order to make amends and move on with her life.

Jennifer Brown writes and lives in the Kansas City, Missouri area with her family. She is the author of Hate List, Torn Away, Thousand Words, Perfect Escape, and Bitter End.

"A must read!"
—Gail Giles, author of Right Behind You and What Happened to Cass McBride?