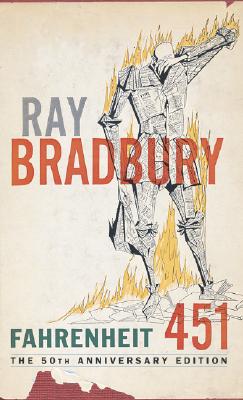 Internationally acclaimed with more than 5 million copies in print, Fahrenheit 451 is Ray Bradbury's classic novel of censorship and defiance, as resonant today as it was when it was first published nearly 50 years ago.

Guy Montag was a fireman whose job it was to start fires...

The system was simple. Everyone understood it. Books were for burning ... along with the houses in which they were hidden.

Guy Montag enjoyed his job. He had been a fireman for ten years, and he had never questioned the pleasure of the midnight runs nor the joy of watching pages consumed by flames... never questioned anything until he met a seventeen-year-old girl who told him of a past when people were not afraid.

Then he met a professor who told him of a future in which people could think... and Guy Montag suddenly realized what he had to do!

Ray Bradbury is America's foremost writer of science fiction and fantasy. Among his most popular adult books are Fahrenheit 451, The Martian Chronicles, The Illustrated Man, Dandelion Wine," and Death is a Lonely Business." In addition, he has written several books for children, including "Switch on the Night." In recognition of his stature in the world of literature and the impact he has had on so many for so many years, Bradbury was awarded the National Book Foundation's 2000 Medal for Distinguished Contribution to American Letters, and the National Medal of Arts in 2004.