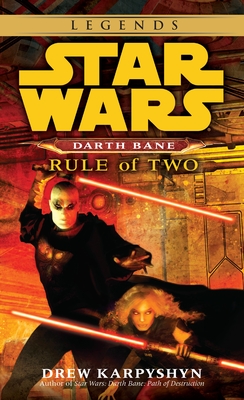 This is book number 2 in the Star Wars: Darth Bane Trilogy - Legends series.

In this essential Star Wars Legends novel, the second in the Darth Bane trilogy, the fearsome Sith lord takes on a deadly new apprentice.

Darth Bane’s twisted genius made him a natural leader among the Sith–until his radical embrace of an all-but-forgotten wisdom drove him to destroy his own order . . . and create it anew from the ashes. As the last surviving Sith, Darth Bane promulgated a harsh new directive: the Rule of Two.

Two there should be; no more, no less.
One to embody the power, the other to crave it.

Now Darth Bane is ready to put his policy into action and thinks he has found the key element that will make his triumph complete: a student to train in the ways of the dark side. Though she is young, Zannah possesses an instinctive link to the dark side that rivals his own. With his guidance, she will become essential in his quest to destroy the Jedi and dominate the galaxy.

Drew Karpyshyn is the New York Times bestselling author of Star Wars: Darth Bane: Path of Destruction and Mass Effect: Revelation, as well as several other fantasy and science fiction novels. He is also an award-winning writer/designer for the computer game company BioWare, where he was lead writer on Mass Effect and the blockbuster Star Wars: Knights of the Old Republic video game. He lives in Canada’s hinterlands with his wife, Jen, and their cat.