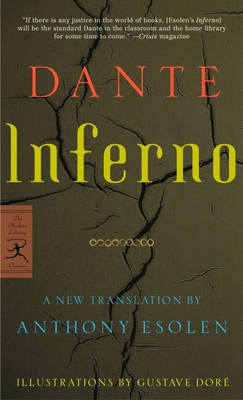 Of the great poets, Dante is one of the most elusive and therefore one of the most difficult to adequately render into English verse. In the Inferno, Dante not only judges sin but strives to understand it so that the reader can as well. With this major new translation, Anthony Esolen has succeeded brilliantly in marrying sense with sound, poetry with meaning, capturing both the poem’s line-by-line vigor and its allegorically and philosophically exacting structure, yielding an Inferno that will be as popular with general readers as with teachers and students. For, as Dante insists, without a trace of sentimentality or intellectual compromise, even Hell is a work of divine art.

The Modern Library has played a significant role in American cultural life for the better part of a century. The series was founded in 1917 by the publishers Boni and Liveright and eight years later acquired by Bennett Cerf and Donald Klopfer. It provided the foundation for their next publishing venture, Random House. The Modern Library has been a staple of the American book trade, providing readers with affordable hardbound editions of important works of literature and thought. For the Modern Library's seventy-fifth anniversary, Random House redesigned the series, restoring as its emblem the running torch-bearer created by Lucian Bernhard in 1925 and refurbishing jackets, bindings, and type, as well as inaugurating a new program of selecting titles. The Modern Library continues to provide the world's best books, at the best prices.

“Dante’s conversations with his mentor Virgil and the doomed shades are by turns assertive and abashed, irritated and pitying and inquisitive, and Anthony Esolen’s new translation renders them so sensitively that they seem to take place in the same room with us. It follows Dante through all his spectacular range, commanding where he is commanding, wrestling, as he does, with the density and darkness in language and in the soul. This Inferno gives us Dante’s vivid drama and his verbal inventiveness. It is living writing.” —James Richardson, Princeton University

“Professor Esolen’s translation of Dante’s Inferno is the best one I have seen, for two reasons. His decision to use unrhymed blank verse allows him to come nearly as close to the meaning of the original as any prose reading could do, and allows him also to avoid the harrowing sacrifices that the demand for rhyme imposes on any translator. And his endnotes and other additions provoke answers to almost any question that could arise about the work.” —A. Kent Hieatt, professor emeritus, University of Western Ontario

“Esolen’s brilliant translation captures the power and the spirit of a poem that does not easily give up its secrets. The notes and appendices provide exactly the kind of help that most readers will need.” —Robert Royal, president, Faith and Reason Institute
My Account • Sign In • Sign Out • Register
NEW & USED BOOKS
AUTHOR EVENTS • GIFTS
Tempe
6428 South McClintock Drive
480.730.0205
[Google Map]
10am-7pm daily
Trade Counter 11am-6pm daily