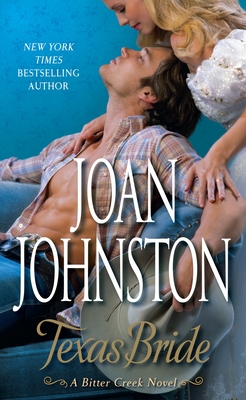 This is book number 9 in the Bitter Creek series.

HE MAY BE HER ONLY HOPE.
SHE MAY BE HIS LAST CHANCE.

Miranda Wentworth never imagined becoming a mail-order bride. Now marriage to a stranger is her only hope of finding a home where she and her two younger brothers can escape the brutality of the Chicago orphanage where they live. With any luck, she can even start a family of her own, once the three of them are settled at Jacob Creed’s Texas ranch. But Miranda has one gigantic concern: Her husband-to-be knows nothing about the brothers she’s bringing along. What if he calls off the deal when he discovers the trick she’s played on him?

Jake Creed is hanging on to his Texas ranch by his fingernails. His nemesis, Alexander Blackthorne, is determined to ruin him. Jake will never give up, but he’s in desperate trouble. His wife died six months ago in childbirth, along with their stillborn son, and his two-year-old daughter needs a mother. The advertisement Jake wrote never mentioned his daughter—or the fact that he has no intention of consummating his marriage. He’s determined never to subject another wife to the burden of pregnancy. But Jake doesn’t count on finding his bride so desirable. He doesn’t count on aching with need when she joins him in bed. And he never suspected his bride would have plans of her own to seduce him.

Joan Johnston is the New York Times and USA Today bestselling author of more than sixty historical and contemporary romance novels. She received a master of arts degree in theater from the University of Illinois and graduated with honors from the University of Texas School of Law at Austin. She is currently a full-time writer living in Colorado.
My Account • Sign In • Sign Out • Register
NEW & USED BOOKS
AUTHOR EVENTS • GIFTS
Tempe
6428 South McClintock Drive
480.730.0205
[Google Map]
10am-7pm daily
Trade Counter 11am-6pm daily