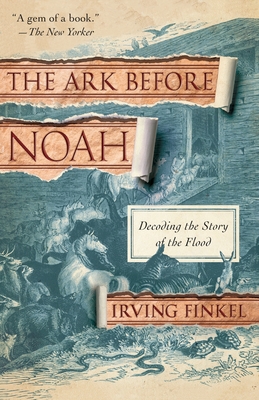 When a small, peculiar, palm-sized clay tablet made its way to the desk of Irving Finkel, Assyriologist and Assistant Keeper at the British Museum, Finkel could hardly believe his luck. What he discovered was a missing piece in the story of Noah and the Ark. In this captivating, absorbing work of scholarship, Finkel, a world authority on ancient Mesopotamia, leads the reader on a detective hunt for the prototype of Noah’s Ark—from cuneiform wedges to bundles of reeds, from ancient Babylon to modern Iraq, Finkel reveals new information on the origin of the Babylonian Flood story which pre-dates the biblical deluge, including the surprising size and shape of the boat itself, and even where it came to rest. New to this edition, Finkel puts the “Ark Tablet” to the test in building a modern version of the ship. Throughout, The Ark Before Noah takes us on an adventurous voyage of discovery, opening the door to an enthralling world of ancient voices and historical lore.

Dr. Irving Finkel is Assistant Keeper of ancient Mesopotamian script, languages, and cultures at the British Museum. He is the curator in charge of cuneiform inscriptions on tablets of clay from ancient Mesopotamia, of which the Middle East Department has the largest collection of any modern museum.

"Fascinating. . . .If you're interested in the history of religion, or detective stories—because this is definitely one—check out The Ark Before Noah." —NY1

"[E]ngaging and informative. . . . Finkel is an enthusiast and shows evident delight in bringing this find to the wider public." —The Wall Street Journal

"[T]he charged thrill of Finkel's chase permeates the book — the pages don't just join dots, they supply new pieces for a beautiful, Bronze-Age jigsaw-puzzle. . . . Consistently scholarly and droll, Finkel’s writing is also eccentrically vivid. . . . It is a joy, at times laugh-out-loud funny. . . . The antediluvian past of the Middle East might seem arcane but this book demonstrates its relevance. . . . Thank God there are still men who can translate [these ancient] messages." —The Times

"A serious book, but rarely a heavy one: in a sprightly good-humoured way, Finkel communicates the thrill of true scholarship. . . . This book does more than change the way we imagine the sources of a Bible story, however. It rescues cuneiform from its dusty place in the museum basement. . . . Fresh and exciting." —Sunday Times

"[Finkel's] conclusions will send ripples into the world of creationism and among ark hunters." —Guardian

"Beguiling. . . . [Written] with great wit and warmth. . . . Finkel is a master at deciphering these ancient cuneiform clay tablets, but this book is far more than a fine piece of detective work: it is a humane work of scholarship that enlarges the soul." —Observer