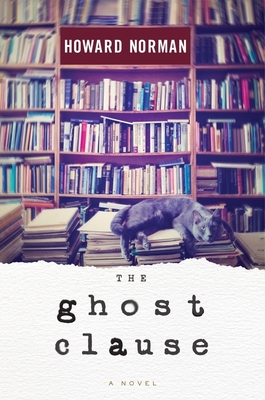 Simon Inescort is no longer bodily present in his marriage. It’s been several months since he keeled over the rail of a Nova Scotia–bound ferry, a massive heart attack to blame. Simon's widow, Lorca Pell, has sold their farmhouse to newlyweds Zachary and Muriel—after revealing that the deed contains a “ghost clause,” an actual legal clause, not unheard of in Vermont, allowing for reimbursement if a recently purchased home turns out to be haunted.

In fact, Simon finds himself still at home: “Every waking moment, I'm astonished I have any consciousness . . . What am I to call myself now, a revenant?” He spends time replaying his marriage in his own mind, as if in poignant reel-to-reel, while also engaging in occasionally intimate observation of the new homeowners. But soon the crisis of a missing child, a local eleven-year-old, threatens the tenuous domestic equilibrium, as the weight of the case falls to Zachary, a rookie private detective with the Green Mountain Agency.

The Ghost Clause is a heartrending, affirming portrait of two marriages—one in its afterlife, one new and erotically charged—and of the Vermont village life that sustains and remakes them.

HOWARD NORMAN is a three-time winner of National Endowment for the Arts fellowships, and a winner of the Lannan Award for fiction. His novels The Northern Lights and The Bird Artist were both nominated for National Book Awards. He is also author of the novels The Museum Guard, The Haunting of L, What Is Left the Daughter,Next Life Might Be Kinder, and My Darling Detective. He divides his time between East Calais, Vermont, and Washington, D.C.

"Howard Norman, who has always stood admirably apart, has reinvented the ghost story; in the process he has crafted a novel not only suspenseful but elegiac, consoling, and wholly absorbing."
—Jhumpa Lahiri, author of Interpreter of Maladies and TheLowland

"In his ever-exquisite, lapidary prose, Howard Norman shows us in The Ghost Clause how we might best cherish our time, whether in this life or the next: through our restive, earthly passions, to the heart song of language; and by our deep devotion to other beings. This is a lovely novel indeed."
—Chang-Rae Lee, author of Native Speaker and On a Full Sea

"Who better than a dead novelist to narrative this tale of married life, a missing child, and a Vermont farmhouse ripe for the haunting? The Ghost Clause is a meditation on many kinds of mystery, not the least of which is the persistent ongoingness of love."
—Alice McDermott, author of Charming Billy and The Ninth Hour
My Account • Sign In • Sign Out • Register
NEW & USED BOOKS
AUTHOR EVENTS • GIFTS
Changing Hands Tempe
6428 S McClintock Dr, Tempe, AZ 85283
480.730.0205
[Google Map]
Sun: Closed
Mon-Sat: 11am-7pm