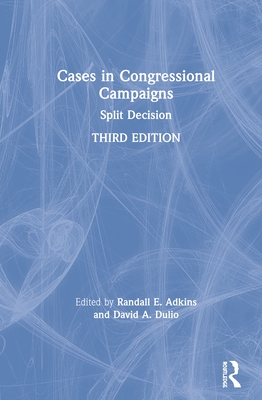 This carefully chosen sample of 2018 congressional campaigns provides readers with an account of the campaign battles that took place across the nation. Although Democrats seemed to be poised for a big blue wave of victory following Donald Trump's historic and divisive 2016 election, the Midterms yielded instead a split decision.

Looking at issues ranging from the Kavanaugh confirmation, health care, the economy, and the impact of President Trump, this book traces the dynamics at work in the 2018 Midterm elections. The editors open with an explanation of the trends in this election cycle, followed by eight in-depth case studies of House and Senate toss-up races involving seats held by endangered Republican incumbents. The book shows how 2018 fits into the context of precursor midterm campaigns and what the analysis of competitive states and districts holds for 2020.

Aimed at a wide variety of college courses as well as general interest readers, this book tells the story of the 2018 Midterms in fascinating detail.

NEW TO THE 3rd EDITION

Explores common themes and structures across all chapters, allowing students to compare disparate election races more easily. Looks at issues ranging from the Kavanaugh confirmation, health care, the economy, and the impact of President Trump, putting campaign dynamics into context with the challenge of governing.

Randall E. Adkins is professor of Political Science and Associate Dean of the College of Arts & Sciences at the University of Nebraska at Omaha. He teaches courses on the presidency, Congress, political parties, and campaigns and elections. Adkins is the editor of The Evolution of Political Parties, Campaigns, and Elections, and is the author of numerous articles and chapters in edited volumes on the presidency and campaigns and elections. His research is published in American Politics Quarterly, American Politics Research, American Review of Politics, the Journal of Political Marketing, Political Research Quarterly, Presidential Studies Quarterly, PS: Political Science and Politics, and Publius: The Journal of Federalism. He is also a former American Political Science Association Congressional Fellow on Capitol Hill where he worked for the Hon. David E. Price (NC-4). David A. Dulio is professor of Political Science and Director of the Center for Civic Engagement at Oakland University where he teaches courses on campaigns and elections, Congress, political parties, interest groups, and other areas of American politics. Dulio has published eleven other books, including Campaigns from the Ground Up: State House Campaigns in a National Perspective and For Better or Worse? How Professional Political Consultants are Changing Elections in the United States. He has written dozens of articles and book chapters on subjects ranging from the role of professional consultants in U.S. elections to campaign finance. Dulio is also a former American Political Science Congressional Fellow on Capitol Hill where he worked in the U.S. House of Representatives Republican Conference for former U.S. Rep. J.C. Watts, Jr. (OK-4).