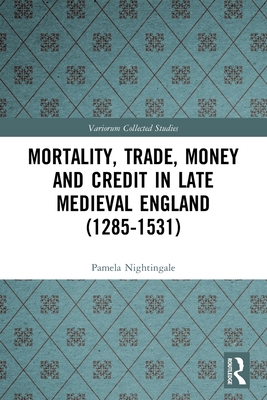 By Pamela Nightingale
Email or call for price

The eleven articles in this volume examine controversial subjects of central importance to medieval economic historians. Topics include the relative roles played by money and credit in financing the economy, whether credit could compensate for shortages of coin, and whether it could counteract the devastating mortality of the Black Death. Drawing on a detailed analysis of the Statute Merchant and Staple records, the articles chart the chronological and geographical changes in the economy from the late-thirteenth to the early-sixteenth centuries. This period started with the triumph of English merchants over alien exporters in the early 1300s, and concluded in the early 1500s with cloth exports overtaking wool in value. The articles assess how these changes came about, as well as the degree to which both political and economic forces altered the pattern of regional wealth and enterprise in ways which saw the northern towns decline, and London rise to be the undisputed financial as well as the political capital of England.

Pamela Nightingale was a scholar of Newnham College, Cambridge, where, for her Ph.D., she worked on the history of the East India Company in the eighteenth century. Her thesis was published in 1970 as Trade and Empire in Western India, 1784-1806, by Cambridge University Press. While her three children were young she taught for the Open University and subsequently published further books on British India and Kashgar in Chinese Central Asia, before making the major change of subject involved in writing A Medieval Mercantile Community. This focused on the Grocers' Company of London and its part in the economic and political developments of the city and of the medieval English economy. In 1999 she was elected a member of Oxford University's History Faculty, and in 2010 she was awarded an Oxford D. Litt degree. She is also a fellow of the Royal Historical Society.