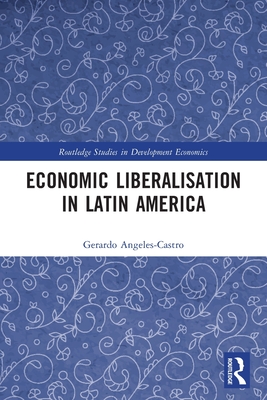 By Gerardo Angeles-Castro
Email or call for price

This book explores the process of economic liberalisation in Latin America and revises the transition from the import substitution industrialisation model to market-oriented reforms. It explains the theoretical foundations of the neoliberal paradigm and the implications of the policies that were labelled as the Washington Consensus. The book also incorporates an assessment on the socio-political norms added to the orthodox prescription, the so-called Post-Washington Consensus. The study comprises a general analysis on the subcontinent and on different economic liberalisation paths, and looks at four country case studies: Mexico, Brazil, Chile, and Uruguay, from the 1980s to recent years.

From this approach, the reader can analyse weaknesses and strengths, the socioeconomic performance, and the difficulties that Latin America has presented through the turbulent process of economic liberalisation, both at an early stage and over the long run, by means of country case studies encompassing the most diverse and representative styles of economic openness in the subcontinent. This allows them to identify the challenges the country faces and the appropriate policies they can follow to cope with sustained economic growth, poverty reduction, and income distribution within an economically open environment. The study is carried out by analysing and contrasting theoretical and empirical perspectives, allowing a broader understanding of the topics.

The book is complementary reading for textbooks, due to the objectivity with which it addresses important and quotidian issues in the region, associating empirical and theoretical topics, and facilitating the understanding of the international political economy of Latin America. It is also suitable for practitioners and researchers, because of the depth in which it covers specific topics and the useful analysis it conducts to incorporate policy implications and suggestions for achieving equitable growth in a context of liberal markets.