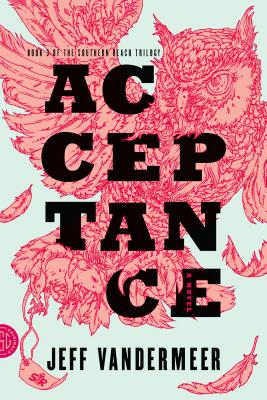 I had reservations the final volume of Vandermeer's dazzling Southern Reach trilogy would not be able to live up to the hype established in the first two books, but this truly is an excellent conclusion. Everything about this series has been pitch-perfect--brilliant writing, excellent pacing, and all published in a beautiful package. Annihilation and Authority both included themes of their namesake in the story, and Acceptance is no different. The motivations of the characters and the origins of Area X become more clear but does that mean anything can be done about it? A genre defying and mind-bending trip, this is a series I will recommend for years to come.

The Southern Reach Trilogy was a well written intriguing series and the final book Acceptance was my favorite. This book explores deeper into the strange world of Area X and ties together the characters and storylines from the first two books. Some of my on going questions were answered as the history and first contact of Area X was revealed. As with the first two books the title Acceptance sets the theme for the story, now that we know more about Area X what is the solution, or is there a solution? Before I started reading I was worried that this book wouldn't be a suitable conclusion for a series that had been so strange, creative and interesting but this book lived up to and exceeded my expectations.

It is winter in Area X, the mysterious wilderness that has defied explanation for thirty years, rebuffing expedition after expedition, refusing to reveal its secrets. As Area X expands, the agency tasked with investigating and overseeing it--the Southern Reach--has collapsed on itself in confusion. Now one last, desperate team crosses the border, determined to reach a remote island that may hold the answers they've been seeking. If they fail, the outer world is in peril.

Meanwhile, Acceptance tunnels ever deeper into the circumstances surrounding the creation of Area X--what initiated this unnatural upheaval? Among the many who have tried, who has gotten close to understanding Area X--and who may have been corrupted by it?

In this New York Times bestselling final installment of Jeff VanderMeer's Southern Reach trilogy, the mysteries of Area X may be solved, but their consequences and implications are no less profound--or terrifying.

Jeff VanderMeer is the author of Dead Astronauts, Borne, and The Southern Reach Trilogy, the first volume of which, Annihilation, won the Nebula Award and the Shirley Jackson Award and was adapted into a movie by Alex Garland starring Natalie Portman. VanderMeer speaks and writes frequently about issues relating to climate change. He grew up in the Fiji Islands and now lives in Tallahassee, Florida, with his wife, Ann VanderMeer, and their cats, plants, and bird feeders.

“A satisfying conclusion to this captivating trilogy” —Booklist

“This trilogy is that rare thing--a set in which the whole is as great as the parts.” —Publishers Weekly

“VanderMeer masterfully conjures up an atmosphere of both metaphysical dread and visceral tension . . . Annihilation is a novel in which facts are undermined and doubt instilled at almost every turn. It's about science as a way of not only thinking but feeling, rather than science as a means of becoming certain about the world. . . . Ingenious.” —Laura Miller, Salon on The Southern Reach Trilogy

“A clear triumph for Vandermeer . . . a compelling, elegant, and existential story . . . .The solitary voice of its post-humanist narrator is both deeply flawed and deeply trustworthy--a difficult and excellent balance in a novel whose world is built seamlessly and whose symbols are rich and dark.” —Lydia Millet, LA Times on The Southern Reach Trilogy

“A book about an intelligent, deadly fungus makes for an enthralling read--trust us.” —Tara Wanda Merrigan, GQ on The Southern Reach Trilogy

“[A] strange, clever, off-putting, maddening, claustrophobic, occasionally beautiful, occasionally disturbing and altogether fantastic book . . . Annihilation is a book meant for gulping--for going in head-first and not coming up for air until you hit the back cover.” —Jason Sheehan, NPR Books on The Southern Reach Trilogy

“Successfully creepy, an old-style gothic horror novel set in a not-too-distant future. The best bits turn your mind inside out.” —Sara Sklaroff, The Washington Post on The Southern Reach Trilogy

“If J.J. Abrams-style by-the-numbers stories of shadowy organizations and science magic have let you down one too many times, then Annihilation will be more like a revelation. VanderMeer peels back the skin of the everyday, and gives you a glimpse of a world where science really is stretching the bounds of our knowledge--sometimes to the point where we can't ever be the same . . . [Annihilation] will make you believe in the power of science mysteries again.” —Annalee Nevitz, io9 on The Southern Reach Trilogy

“Fans of the Lost TV series . . . this one is for you.” —Molly Driscoll, Christian Science Monitor on The Southern Reach Trilogy

“What frightens you? According to many psychologists, our most widely shared phobia is the fear of falling. Jeff VanderMeer's novel Annihilation taps into that bottomless terror . . . VanderMeer ups the book's eeriness quotient with the smoothest of skill, the subtlest of grace. His prose makes the horrific beautiful.” —Nisi Shawl, Seattle Times on The Southern Reach Trilogy

“Much of the flora and fauna seem familiar, but that's what's so fascinating about the carnage that VanderMeer sets loose. He has created a science fiction story about a world much like our own.” —John Domini, Miami Herald on The Southern Reach Trilogy

“The plot moves quickly and has all the fantastic elements you'd ever want--biological contaminants, peculiar creatures, mysterious deaths--but it's the novel's unbearable dread that lingers with me days after I've finished it.” —Justin Alvarez, The Paris Review on The Southern Reach Trilogy

“Jeff VanderMeer ventures on to strange ground in this enigmatic story.” —Alex Good, The Toronto Star on The Southern Reach Trilogy

“The first book in what may be a modern classic of post-apocalyptic sci-fi . . . .Annihilation's story struck me hard and pulled me in fast. I haven't had a reading experience this creepy, intense, and edge-of-your-seat since H.P. Lovecraft's At the Mountains of Madness.” —Paul Schwartz, UR Chicago on The Southern Reach Trilogy

“Master of the literary headtrip Jeff VanderMeeer's Annihilation is simply unlike anything you've read before. It gnaws away at your nerves with a slow-building sense of dread and impending madness.” —Marc Savlov, Kirkus Reviews on The Southern Reach Trilogy

“After their high-risk expedition disintegrates, it's every scientist for herself in this wonderfully creepy blend of horror and science fiction. . . . Speculative fiction at its most transfixing.” —Kirkus (Starred Review) on The Southern Reach Trilogy

“A gripping fantasy thriller, Annihilation is thoroughly suspenseful. In a manner similar to H. G. Wells' in The Island of Dr. Moreau (1896), VanderMeer weaves together an otherworldly tale of the supernatural and the half-human. Delightfully, this page-turner is the first in a trilogy.” —Heather Paulson, ALA Booklist (Starred Review) on The Southern Reach Trilogy

“Brilliant . . . ever-more-terrifying, yet ever-more-transcendent . . . .Using evocative descriptions of the biologist's outer and inner worlds, masterful psychological insight, and intellectual observations both profound and disturbing--calling Lovecraft to mind and Borges--VanderMeer unfolds a tale as satisfying as it is richly imagined.” —Publishers Weekly on The Southern Reach Trilogy

“In much of Jeff VanderMeer's work, a kind of radiance lies beating beneath the surface of the words. Here in Annihilation, it shines through with warm blazing incandescence. This is one of a grand writer's finest and most dazzling books.” —Peter Straub, author of Lost Boy, Lost Girl on The Southern Reach Trilogy

“One of those books where it all comes together--the story and the prose and the ideas, all braided into a triple helix that gives rise to something vibrant and alive. Something that grows, word-by-word, into powerful, tangled vines that creep into your mind and take hold of it. Annihilation is brilliant and atmospheric, a novel that has the force of myth.” —Charles Yu, author of How to Live in a Science Fictional Universe on The Southern Reach Trilogy

“A dazzling book . . . haunted and haunting.” —Kelly Link, author of Magic for Beginners on The Southern Reach Trilogy

“A tense and chilling psychological thriller about an unraveling expedition and the strangeness within us. A little Kubrick, a lot Lovecraft, the novel builds with an unbearable tension and a claustrophobic dread that linger long afterward. I loved it.” —Lauren Beukes, author of The Shining Girls on The Southern Reach Trilogy

“The great thing about Annihilation is the strange, elusive, and paranoid world that it creates. . . .I can't wait for the next one.” —Brian Evenson, author of Last Days on The Southern Reach Trilogy

“It's been a long time since a book filled me with this kind of palpable, wondrous disquiet, a feeling that started on the first page and that I'm not sure I've yet shaken.” —Matt Bell, author of In the House upon the Dirt between the Lake and the Woods on The Southern Reach Trilogy

“This swift surreal suspense novel reads as if Verne or Wellsian adventurers exploring a mysterious island had warped through into a Kafkaesque nightmare world. The reader will want to stay trapped with the Biologist to find the answers to Area X's mysteries.” —Kim Stanley Robinson, author of the Mars trilogy

“Unsettling and un-put-downable like an old-fashioned adventure story, only weirder, beautifully written and not at all old-fashioned.” —Karen Joy Fowler, BookPage on The Southern Reach Trilogy

“The prose is phenomenal . . . it toyed with my imagination in ways that haven't happened since A Wrinkle in Time.” —Madison Vain, Entertainment Weekly on The Southern Reach Trilogy

“Its deepest terror lies in its exploration of . . . the human heart, and the terror that can grow from the ways in which we are untrue to each other, and to ourselves.” —Jared Bland, The Globe and Mail on The Southern Reach Trilogy

“VanderMeer's masterful command of the plot, his cast of characters, and the increasingly desperate situation will leave the reader desperate for the final volume in the trilogy.” —Publishers Weekly on The Southern Reach Trilogy

“What frightens you? According to many psychologists, our most widely shared phobia is the fear of falling. Jeff VanderMeer's Annihilation taps into that bottomless terror . . . VanderMeer ups the book's eeriness quotient with the smoothest of skill, the subtlest of grace. His prose makes the horrific beautiful.” —Nisi Shawl, The Seattle Times on The Southern Reach Trilogy

“There's something Poe-like in this tightening, increasingly paranoid focus . . . the payoff is absolutely worth the patience.” —N.K. Jemisin, The New York Times on The Southern Reach Trilogy