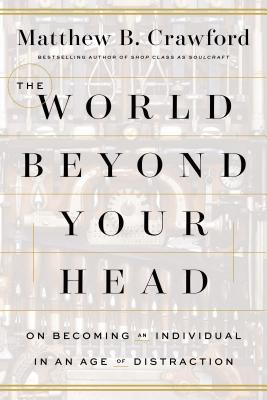 By Matthew B. Crawford
Email or call for price
Out of Print

Crawford has the refreshing ability to ground his philosophical arguments in practical, relatable points. Looking at everything from the ever-present bombardment we face from advertisers and corporations, to the constant pressure the current generation is raised with to “be yourself” and not be defined by any group, Crawford explores just what is posited by the idea of the “individual”, and the absurdity of attempting to define oneself in a vacuum. Crawford’s book will make you look at the “world beyond your head” in a new way, and maybe make you feel a little less crazy about the way we interact with it.

In his bestselling book Shop Class as Soulcraft, Matthew B. Crawford explored the ethical and practical importance of manual competence, as expressed through mastery of our physical environment. In his brilliant follow-up, The World Beyond Your Head, Crawford investigates the challenge of mastering one's own mind.
We often complain about our fractured mental lives and feel beset by outside forces that destroy our focus and disrupt our peace of mind. Any defense against this, Crawford argues, requires that we reckon with the way attention sculpts the self.
Crawford investigates the intense focus of ice hockey players and short-order chefs, the quasi-autistic behavior of gambling addicts, the familiar hassles of daily life, and the deep, slow craft of building pipe organs. He shows that our current crisis of attention is only superficially the result of digital technology, and becomes more comprehensible when understood as the coming to fruition of certain assumptions at the root of Western culture that are profoundly at odds with human nature.
The World Beyond Your Head makes sense of an astonishing array of common experience, from the frustrations of airport security to the rise of the hipster. With implications for the way we raise our children, the design of public spaces, and democracy itself, this is a book of urgent relevance to contemporary life.

Matthew B. Crawford is a senior fellow at the University of Virginia's Institute for Advanced Studies in Culture and a fabricator of components for custom motorcycles. His bestselling book Shop Class as Soulcraft: An Inquiry into the Value of Work, which has been translated into nine languages, has prompted a wide rethinking of education and labor policies in the United States and Europe, leading The Sunday Times to call him "one of the most influential thinkers of our time."

“Crawford’s greatest service is to spur our thought, to enjoin his readers to pay attention to the struggle of paying attention. . . . Some of The World Beyond Your Head’s individual chapters approach true excellence . . . In Crawford’s skillful hands . . . examples are far more than irreverent illustrations of philosophy by pop culture; they are illuminations from within of the many — and often surprising — connections between philosophy and ideology . . . Books like this gather strands of individual experience, cultural malaise, and philosophical reflection, weaving them together to form braided rope whose tensile strength has the power to lead readers forward, onward, and downward — from the personal to the cultural to the political by way of the social.” —Charles Clavey, The Los Angeles Review of Books

“The most cogent and incisive book of social criticism I've read in a long time. Reading it is like putting on a pair of perfectly suited prescription glasses after a long period of squinting one's way through life.” —Damon Linker, The Week

“[A] brilliant and searching new work of social criticism . . . Crawford proposes a different model of individuality and choice, at once traditional and radically new. Expounding it, with richly informative excursions into neuroscience, experimental psychology, intellectual history, mass culture, skilled crafts, and sports, is the main business of The World Beyond Your Head.” —George Scialabba, Boston Review

“It's increasingly difficult to pay attention in the blooming, buzzing confusion of the modern world. Matthew Crawford argues persuasively that it's time to fight back . . . Rather than embracing the standard coffee-mug view of philosophy as a repository of sage aphorisms to be summoned while sipping warm beverages, Crawford respects past thinkers enough both to argue with them and to notice their legacies in diverse cultural strata. He clashes with Kant while considering children's cartoons; he sees an ideal from Kierkegaard lurking behind the generic Muzak at a university gym; he uses Hegel to diagnose the contradictions of New Age concepts of self-realization . . . Crawford offers a compelling general framework for the ethics of attention.” —Nick Romeo, The Daily Beast

“Crawford is really part of a long-term philosophical workshop, all of whose apprentices have tried to find better terms for joining the world than what have been offered by their contemporary socioeconomic regimes. Ruskin and Dewey are part of the shop, as are William James and Jane Addams. I am confident they would happily offer whatever their equivalent would be of a vroom-vroom bike-engine sign of acknowledgment. Through philosophy and storytelling, Crawford has joined their project of loosening the grip of alienation and designed inhumanity. That's a job well done.” —Michael Roth, The Chronicle of Higher Education

“Educators, politicians, urban planners, interior decorators, and many others would benefit from thinking carefully about the problem Crawford has identified . . . The World Beyond Your Head is an enormously rich book, a timely and important reflection on an increasingly important subject. Pay attention.” —Ian Tuttle, The New Criterion

“Crawford's diagnosis of our scatterbrained ennui [is] on target, and [The World Beyond Your Head] is peppered with startling insights. One comes when he contrasts Mickey Mouse cartoons of decades past, in which contraptions invariably break down or assault their owners, to the contemporary universe of 'Mickey Mouse Clubhouse,' where gadgets are error-free servants and faithful friends. It's the kind of technological utopianism that primes a young mind to buy whatever Silicon Valley is selling.” —John Keilman, The Chicago Tribune

“In its exploration of how we come to know ourselves, The World Beyond Your Head harks back to vital debates between humanists like Joseph Wood Krutch and the behavioral psychologist B.F. Skinner, as well as later works by the agrarian social critic Wendell Berry. Readers who know Robert Pirsig's classic Zen and the Art of Motorcycle Maintenance will also hear its engines purr in Crawford's work. Like Pirsig, he raises thrilling questions about human nature and calls for a more generous, more diverse definition of excellence.” —Chris Tucker, The Dallas Morning News

“Crawford is deeply interested in how one masters one's own mind, especially in a time of information overload and constant distraction provided by technology. In a manner similar to Malcolm Gladwell, this brilliant work looks at individuals from varied walks of life, including hockey players and short-order cooks, to focus on the theme of how important (and difficult) it is to truly pay attention in our noisy world . . . rich in excellent research, argument, and prose.” —Publishers Weekly, starred review

“In the gambling addict, dead broke at the slot machine, Crawford finds the surprising terminus of a way of thinking traceable to Descartes, Kant, and Locke. . . Extending themes of his acclaimed Shop Class as Soulcraft, Crawford shows how the short-order cook, the welder, the carpenter, the pipe-organ builder all achieve a free individuality by submitting to the authority of mentors who discipline their minds for full engagement with the complexities of the external environment. Those who never mature into this valid individuality, Crawford warns, disappear into a distracted crowd of mindless consumers unable to recognize the distinctions that sustain a vibrant democracy. Worse, such stunted psyches are easy prey for the corporate strategists who hide their predations behind the faux freedoms of the shopping center-and the casino. A cultural inquiry of rare substance and insight.” —Booklist, starred review

“[Crawford] takes a unique look at attention, positing that it is a commodity . . . He explains his theories well, with strong writing and citations, and the resulting argument is fresh and extremely enlightening. What is most satisfying is that technology is not blamed for the modern deluge of distractions-it is discussed as the cumulative effect of a number of influences found within Western culture.” —Library Journal, starred review