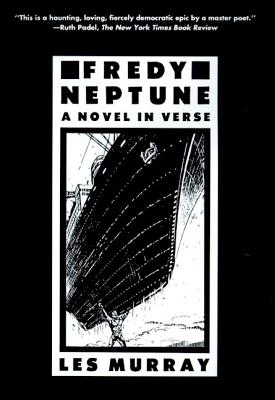 I never learned the old top ropes,
I was always in steam.
Less capstan, less climbing,
more re-stowing cargo.
Which could be hard and slow
as farming- but to say

Why this is Valparaiso!

Or: I'm in Singapore and know my way about
takes a long time to get stale
.-from Book I, "The Middle Sea"

When German-Australian sailor Friedrich "Fredy" Boettcher is shanghaied aboard a German Navy battleship at the outbreak of World War I, the sight of frenzied mobs burning Armenian women to death in Turkey causes him, through moral shock, to lose his sense of touch. This mysterious disability, which he knows he must hide, is both protection and curse, as he orbits the high horror and low humor of a catastrophic age.Told in a blue-collar English that regains freshness by eschewing the mind-set of literary language, Fredy's picaresque life-as, perhaps, the only Nordic Superman ever-is deep-dyed in layers of irony and attains a mind-inverting resolution.

Les Murray (1938–2019) was a widely acclaimed poet, recognized by the National Trust of Australia in 2012 as one of the nation’s “living treasures.” He received the 1996 T. S. Eliot Prize for Subhuman Redneck Poems and was awarded the Queen’s Gold Medal for Poetry in 1998. He served as literary editor of the Australian journal Quadrant from 1990 to 2018. His other books include Dog Fox Field, Translations from the Natural World, Fredy Neptune: A Novel in Verse, Learning Human: Selected Poems, Conscious and Verbal, Poems the Size of Photographs, and Waiting for the Past.

“Murray's way with language and imagery is thrilling. . . . He has given his protagonist a biting plebeian voice, a vernacular that soars.” —The New York Times

“Working-class lyricism undiminished in two hundred and fifty-three pages. . . . You can rely on the unexpected to keep happening here, and always to be exhilarating.” —The New Yorker

“Highly charged in ideas as in language, Fredy Neptune may jump from sin to salvation and from Suez to Sydney in a single stanza, but it is no novelty act. Neither archer nor centaur, it is a novel. And a ripping good yarn.” —Los Angeles Times