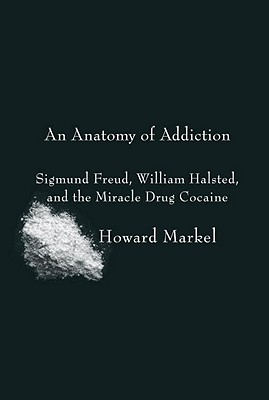 From acclaimed medical historian Howard Markel, author of When Germs Travel, the astonishing account of the years-long cocaine use of Sigmund Freud, young, ambitious neurologist, and William Halsted, the equally young, pathfinding surgeon. Markel writes of the physical and emotional damage caused by the then-heralded wonder drug, and how each man ultimately changed the world in spite of it—or because of it. One became the father of psychoanalysis; the other, of modern surgery.

Both men were practicing medicine at the same time in the 1880s: Freud at the Vienna General Hospital, Halsted at New York’s Bellevue Hospital. Markel writes that Freud began to experiment with cocaine as a way of studying its therapeutic uses—as an antidote for the overprescribed morphine, which had made addicts of so many, and as a treatment for depression.

Halsted, an acclaimed surgeon even then, was curious about cocaine’s effectiveness as an anesthetic and injected the drug into his arm to prove his theory. Neither Freud nor Halsted, nor their colleagues, had any idea of the drug’s potential to dominate and endanger their lives. Addiction as a bona fide medical diagnosis didn’t even exist in the elite medical circles they inhabited.

In An Anatomy of Addiction, Markel writes about the life and work of each man, showing how each came to know about cocaine; how Freud found that the drug cured his indigestion, dulled his aches, and relieved his depression. The author writes that Freud, after a few months of taking the magical drug, published a treatise on it, Über Coca, in which he described his “most gorgeous excitement.” The paper marked a major shift in Freud’s work: he turned from studying the anatomy of the brain to exploring the human psyche.

Halsted, one of the most revered of American surgeons, became the head of surgery at the newly built Johns Hopkins Hospital and then professor of surgery, the hospital’s most exalted position, committing himself repeatedly to Butler Hospital, an insane asylum, to withdraw from his out-of control cocaine use.

Halsted invented modern surgery as we know it today: devising new ways to safely invade the body in search of cures and pioneering modern surgical techniques that controlled bleeding and promoted healing. He insisted on thorough hand washing, on scrub-downs and whites for doctors and nurses, on sterility in the operating room—even inventing the surgical glove, which he designed and had the Goodyear Rubber Company make for him—accomplishing all of this as he struggled to conquer his unyielding desire for cocaine.

An Anatomy of Addiction tells the tragic and heroic story of each man, accidentally struck down in his prime by an insidious malady: tragic because of the time, relationships, and health cocaine forced each to squander; heroic in the intense battle each man waged to overcome his affliction as he conquered his own world with his visionary healing gifts. Here is the full story, long overlooked, told in its rich historical context.

Howard Markel, M.D., Ph.D., is the George E. Wantz Distinguished Professor of the History of Medicine and director of the Center for the History of Medicine at the University of Michigan. His books include "Quarantine! "and "When Germs Travel. "His articles have appeared in "The New York Times, The Journal of the American Medical Association, "and "The New England Journal of Medicine," and he is a frequent contributor to National Public Radio. Markel is a member of the Institute of Medicine of the National Academy of Sciences and lives in Ann Arbor, Michigan.

“Markel creates rich portraits of men who shared, as he writes of Freud, a ‘particular constellation of bold risk taking, emotional scar tissue, and psychic turmoil.’”
—The New Yorker

“Terrific . . . This rich, engrossing book reminds us of the strangeness of even heroic destinies.”
—Richard Rayner, Los Angeles Times


“[A] rich, revelatory new book . . . . [Markel is] a careful writer and a tireless researcher, and as a trained physician himself, Markel is able to pronounce on medical matters with firmness and authority.”
—Lev Grossman, TIME

“Absorbing and thoroughly documented. . . a vivid narrative of two of the most remarkable of the many contributors to our understanding of human biology and function . . . A tour de force of scientific and social history, one that helps illuminate a unique period in the long story of medical discovery.”
—Sherwin Nuland, on the cover of The New York Times Book Review

"Compelling and compassionate. . . a book that profoundly demonstrates the complexity and breadth of their genius. . . a richly woven analysis complete with anecdotes, historical research, photos and present-day knowledge about the character of the addictive personality."
—Booklist

“From the dramatic opening scene on the first page to the epilogue, An Anatomy of Addiction is a hugely satisfying read. Howard Markel is physician, historian and wonderful storyteller, and since his tale involves two of the most  compelling characters in medicine, I could not put it down—addictive is the word for this terrific book.”
—Abraham Verghese, author of Cutting for Stone