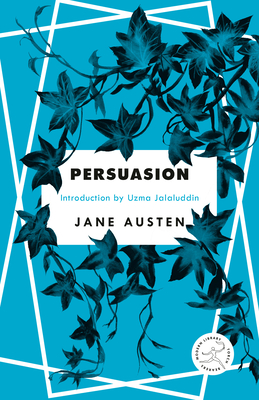 Jane Austen’s last completed novel, a brilliantly insightful story of regret, second chances, and the courage to follow our hearts

Anne Elliot is twenty-seven and unmarried—by all accounts a spinster in her time—seemingly doomed to spend the rest of her life waiting on her image-obsessed father and extravagant older sister; attempting to maintain their once lavish, now dwindling family estate; and occasionally babysitting the children of her married younger sister.

It wasn’t always this way, though. When Anne was nineteen, she was in love with and engaged to Frederick Wentworth, a man with no money and few prospects. Anne’s well-meaning family and friends convinced her that a young heiress like herself could do better, so she broke off the engagement. But when chance brings Wentworth and Anne together again eight years later, he is now an accomplished naval captain with an impressive fortune, and Anne must face her feelings for him that remain and consider how different her life could have been if only she hadn’t been so easily persuaded by others.

Jane Austen was born in Steventon, Hampshire, on December 16, 1775. Her father, the Reverend George Austen, was rector of Steventon, where she spent her first twenty-five years, along with her six brothers (two of them later naval officers in the Napoleonic wars) and her adored sister, Cassandra. She read voraciously from an early age, counting among her favorites the novels of Samuel Richardson, Henry Fielding, and Fanny Burney, and the poetry of William Cowper and George Crabbe. Her family was lively and affectionate and they encouraged her precocious literary efforts, the earliest dating from age twelve, which already displayed the beginnings of her comic style. Her first novels, Elinor and Marianne (1796) and First Impressions (1797), were not published. The gothic parody Northanger Abbey was accepted for publication in 1803 but was ultimately withheld by the publisher.

In 1801 the family moved to Bath, where for four years Austen was able to observe the fashionable watering place that would later figure prominently in her fiction. Austen was sociable in her youth, and was briefly engaged in 1802. Two years later she began work on The Watsons, a novel that remained unfinished. After the death of her father in 1805, she lived with her mother and sister in Southampton for a few years before moving with them to a cottage at Chawton in Hampshire. This would be her home for the rest of her life, and she wrote many of her novels in its parlor. She continued to revise her earlier unpublished work, and in 1811 a version of Elinor and Marianne was published as Sense and Sensibility, followed two years later by Pride and Prejudice, a reworking of First Impressions. In the next few years she published Mansfield Park (1814) and Emma (1816).

Austen became ill in 1815, perhaps with Addison's disease, and she died on July 18, 1817. Persuasion, her last novel, and the earlier Northanger Abbey appeared the following year. Of her last days her brother wrote: 'She wrote whilst she could hold a pen, and with a pencil when a pen was become too laborious. The day preceding her death she composed some stanzas replete with fancy and vigour.' Although Austen received some praise from her contemporaries--notably Sir Walter Scott, who discerned in her work 'the exquisite touch, which renders ordinary commonplace things and characters interesting, from the truth of the description and the sentiment'--her detractors included Charlotte Bronte ('very incomplete and rather insensible') and Ralph Waldo Emerson ('vulgar in tone, sterile in artistic invention'), and her books did not immediately find a wide readership. The turn in her reputation came late in the nineteenth century, and has been succeeded by an enduring popularity and widespread critical praise in the twentieth.

“Critics, especially [recently], value Persuasion highly, as the author’s ‘most deeply felt fiction,’ ‘the novel which in the end the experienced reader of Jane Austen puts at the head of the list.’ . . . Anne wins back Wentworth and wins over the reader; we may, like him, end up thinking Anne’s character ‘perfection itself.’” –from the Introduction by Judith Terry