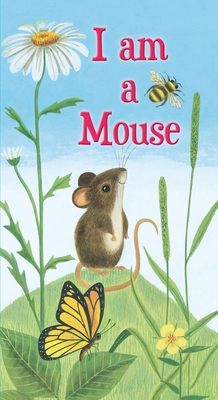 Fans of the Richard Scarry classic I am a Bunny will love this cuddly companion board book, featuring an adorable little mouse and his friends.

I’m quite small, and I’m a mouse. I live in a big field near the woods.

A friendly wood mouse visits his many friends and neighbors. He talks to trout, ducks, a woodpecker, and even coaxes a shy newt out from his hiding place to say hello. The only animal he is not so friendly with is the owl, from whom he runs and hides. This gentle story, beautifully illustrated by the legendary J. P. Miller, was out of print for many years but is now back to delight a new generation of Golden Book fans.

Ole Risom (1920-2000) was one of the most influential publishers of mass-market books for children. He was vice president and art director of Golden Books at Western Publishing Company from 1952-1972, and then vice president and associate publisher of the juvenile division of Random House from 1972-1990. He worked closely with his good friend Richard Scarry over the years at both houses. He also worked with Dr. Seuss, Jim Henson, Stan and Jan Berenstain, Leo Lionni, Laurent de Brunhoff, Charles M. Schulz, and Marc Brown.

J. P. Miller (1913-2001) illustrated many Golden Book titles from the 1940s through the 1970s, some written by Margaret Wise Brown and Edith Kunhardt. Before becoming a children's book illustrator, Miller had worked in the Walt Disney Studio's elite character modeling department, creating characters (such as the dwarf Dopey) for Disney's first feature film, Snow White. He later designed the character of the toy maker Geppetto for Pinocchio.