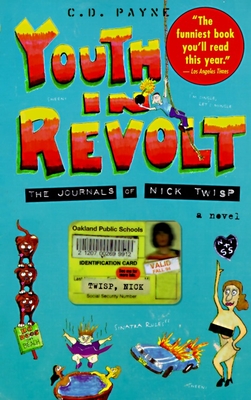 This is book number 1 in the Youth in Revolt series.

The inspiration for the same-named movie starring Michael Sera (2009), Youth In Revolt is even funnier (and dirtier) in print. Nick Twisp can't get a break: after unsuccessful schemes to lose his virginity and the increasingly dangerous (and illegal) hijinks of his alter-ego, Francois, he finds himself a homeless fugitive. What’s a 14-year old boy in search of sex and rebellion to do? Youth in Revolt chronicles the raunchy slapstick misadventures of an honors-student turned oversexed revolutionary. This is the subversive coming-of-age story for children of the 90s—and a daringly naughty book that you'll read again and again. If riotous laugh-out-loud novels are your thing, this isn’t one to miss!

Youth in Revolt is the journals of Nick Twisp, California's most precocious diarist, whose ongoing struggles to make sense out of high school, deal with his divorced parents, and lose his virginity result in his transformation from an unassuming fourteen-year-old to a modern youth in open revolt. As his family splinters, worlds collide, and the police block all routes out of town, Nick must cope with economic deprivation, homelessness, the gulag of the public schools, a competitive type-A father, murderous canines, and an inconvenient hair trigger on his erectile response—all while vying ardently for the affections of the beauteous Sheeni Saunders, teenage goddess, and ultimate intellectual goad.

C.D. Payne is the author of the novels Revolting Youth, Civic Beauties, Cut to the Twisp, Frisco Pigeon Mambo, Young and Revolting, and Revoltingly Young, among others. He lives in Sonoma County.