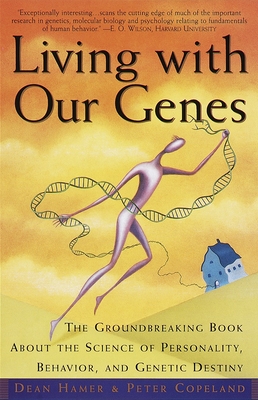 "A lucid, thought-provoking account of the case for 'nature' as a determinant of personality."—Peter D. Kramer, Author of Listening to Prozac and Should You Leave?

Nowhere is the nature-nurture controversy being more arduously tested than in the labs of world-renowned molecular scientist Dean Hamer, whose cutting-edge research has indisputably linked specific genes to behavioral traits, such as anxiety, thrill-seeking, and homosexuality. The culmination of that research is this provocative book, Living with Our Genes. In it, Dr. Hamer reveals that much of our behavior—how much we eat and weigh, whether we drink or use drugs, how often we have sex—is heavily influenced by genes. His findings help explain why one brother becomes a Wall Street trader, while his sibling remains content as a librarian, or why some people like to bungee-jump, while others prefer Scrabble. Dr. Hamer also sheds light on some of the most compelling and vexing aspects of personality, such as shyness, aggression, depression, and intelligence.

In the tradition of the bestselling book Listening to Prozac, Living with Our Genes is the first comprehensive investigation of the crucial link between our DNA and our behavior.

"Compulsive reading, reminiscent of Jared Diamond, from a scientist who knows his stuff and communicates it well."—Kirkus Reviews

"A pioneer in the field of molecular psychology, Hamer is exploring the role genes play in governing the very core of our individuality. Accessible . . . provocative."—Time

DR. DEAN HAMER is a preeminent geneticist and author of The Science of Desire, a New York Times Notable Book of the Year, and Living with Our Genes. Together with his scientific collaborators at the National Cancer Institute at the National Institutes of Health, he has authored more than one hundred articles for popular and academic science journals. His television appearances include Good Morning America, Dateline, Oprah, the national news shows, and documentaries for HBO, PBS, and the Discovery Channel. Dr. Hamer received his Ph.D. from Harvard University and is the recipient of numerous awards, including the Ariens Kappers Award for Neurobiology.

Peter Copeland, a journalist based in Washington, DC, has published four books. His first book, She Went to War, was written with Rhonda Cornum, a U.S. Army doctor who was a POW in Iraq. He wrote My Soul Purpose with Heidi von Beltz. Copeland and Dean Hamer colaborated on The Science of Desire and Living With Our Genes.

Peter Copeland was the editor and general manager of Scripps Howard News Service. He started his journalism career at the City News Bureau of Chicago, covered the U.S.-Mexico border for the El Paso Herald-Post, and spent five years covering Latin America based in Mexico City. He covered the Pentagon for five years, including the U.S. invasion of Panama, the Gulf War and the invasion of Somalia. Currently he is a writer and media consultant.