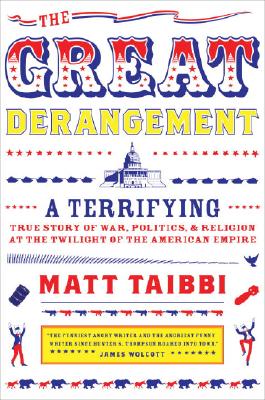 
Rolling Stone’s Matt Taibbi set out to describe the nature of George Bush’s America in the post-9/11 era and ended up vomiting demons in an evangelical church in Texas, riding the streets of Baghdad in an American convoy to nowhere, searching for phantom fighter jets in Congress, and falling into the rabbit hole of the 9/11 Truth Movement.
Matt discovered in his travels across the country that the resilient blue state/red state narrative of American politics had become irrelevant. A large and growing chunk of the American population was so turned off—or radicalized—by electoral chicanery, a spineless news media, and the increasingly blatant lies from our leaders (“they hate us for our freedom”) that they abandoned the political mainstream altogether. They joined what he calls The Great Derangement.
Taibbi tells the story of this new American madness by inserting himself into four defining American subcultures: The Military, where he finds himself mired in the grotesque black comedy of the American occupation of Iraq; The System, where he follows the money-slicked path of legislation in Congress; The Resistance, where he doubles as chief public antagonist and undercover member of the passionately bonkers 9/11 Truth Movement; and The Church, where he infiltrates a politically influential apocalyptic mega-ministry in Texas and enters the lives of its desperate congregants. Together these four interwoven adventures paint a portrait of a nation dangerously out of touch with reality and desperately searching for answers in all the wrong places.
Funny, smart, and a little bit heartbreaking, The Great Derangement is an audaciously reported, sobering, and illuminating portrait of America at the end of the Bush era.

PRAISE FOR
THE GREAT DERANGEMENT

"Matt Taibbi is the best American journalism has to offer. As The Great Derangement shows, he has absolutely no fear in confronting the corruption that plagues our government and exploring rising desperation that plagues America. And somehow, he pulls it off while making us simultaneously weep in sorrow and laugh our asses off." –David Sirota, author of Hostile Takeover


“The Great Derangement is a scabrous, hilarious vivisection of our disintegrating nation. An unstinting reporter and sensational writer, Taibbi shines a light on the corruption, absurdities and idiot pieties of modern American politics. Beneath his cynical fury, though, are flashes of surprising compassion for the adrift, credulous souls who are taken in by it all.  I loved this book."
–Michelle Goldberg, New York Times bestselling author of Kingdom Coming: The Rise of Christian Nationalism

“Where other mainstream news sources fail, Matt Taibbi madly embraces his role as an honest political observer/writer/citizen in a democracy. I would also like to take this opportunity to ask for Matt’s hand in marriage”.
–Janeane Garofalo

“With his trademark mordant wit, Taibbi explores the ‘black comedy’ of the American polis. . .thoughtful Democrats, Republicans, and independents will find common ground in this book that punctures pretense, hypocrisy, and know-nothingness.” —Publisher’s Weekly

“Taibbi is a powerful writer, and his righteous fury with the sickening mechanism of congressional corruption seethes on every page.” –Kirkus Reviews

“It's a fascinating and hilarious study, fueled by Taibbi's own brand of paranoia, reflecting a cruel light on an America gone wild.”–Los Angeles Times

“A vicious, funny, heartbreaking tour of the American scene.” –The New York Observer

“Acidly funny… For readers who have themselves grown desperate, Taibbi’s renegade book is a bracing kind of salvation–the kind that will amuse and enrage at the same time.”  –Time Out

“Vibrant, rich and irreverent.  It's quotable, pointed, painful, funny and true. Thank God we have Matt Taibbi around.”  –Daily Kos