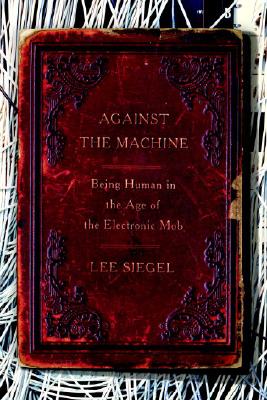 Of course the Internet is not one thing or another; if anything, its boosters claim, the Web is everything at once. It’s become not only our primary medium for communication and information but also the place we go to shop, to play, to debate, to find love. Lee Siegel argues that our ever-deepening immersion in life online doesn’t just reshape the ordinary rhythms of our days; it also reshapes our minds and culture, in ways with which we haven’t yet reckoned. The web and its cultural correlatives and by-products—such as the dominance of reality television and the rise of the “bourgeois bohemian”—have turned privacy into performance, play into commerce, and confused “self-expression” with art. And even as technology gurus ply their trade using the language of freedom and democracy, we cede more and more control of our freedom and individuality to the needs of the machine—that confluence of business and technology whose boundaries now stretch to encompass almost all human activity.

Siegel’s argument isn’t a Luddite intervention against the Internet itself but rather a bracing appeal for us to contend with how it is transforming us all. Dazzlingly erudite, full of startlingly original insights, and buoyed by sharp wit, Against the Machine will force you to see our culture—for better and worse—in an entirely new way.

“One of the country’s most eloquent and acid-tongued cultural critics.”
-Deborah Solomon, New York Times

“To read him is to be reminded of what criticism used to aspire to in terms of range, learning, high standards, and good writing and--dare one say it?--values.”
-- David Rieff

“Savor his vigorous prose, and prepare to be surprised.”
--Pete Hamill

“In every case, Siegel is wildly and satisfyingly unpredictable.”
--Janet Malcolm

"One of the heroic few."
-- The Guardian