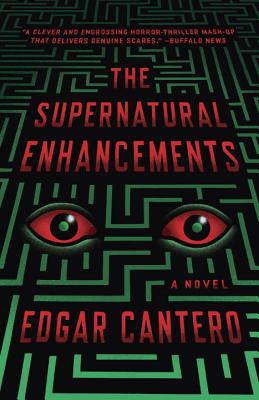 Welcome to your new favorite mystery/adventure/haunted house/all-around weird novel. Told through letters, camera footage, and journal entries, The Supernatural Enhancements has something fantastic to offer in every chapter. The main character, A., though perhaps a bit overly verbose in his opening letters, is a delight to keep up with in his attempts to discover the secrets of Axton House. His sidekick, Niamh, a mute girl who communicates through her journal, is perhaps even more interesting a character than A. Despite being told through so many different mediums, I never found the story-line jarring or difficult to follow. If you're looking for something just a little bit different, pick up The Supernatural Enhancements. You won't be disappointed.

When twentysomething A., the European relative of the Wells family, inherits a beautiful, yet eerie, estate set deep in the woods of Point Bless, Virginia, it comes as a surprise to everyone including A. himself. After all, he never knew he had a "second cousin, twice removed" in America, much less that his eccentric relative had recently committed suicide by jumping out of the third floor bedroom window at the same age and in the same way as his father had before him . . .
Together with A.'s companion, Niamh, a mute teenage punk girl from Ireland, they arrive in Virginia and quickly come to feel as if they have inherited much more than just a rambling home and an opulent lifestyle. Axton House is haunted... they know it...but the presence of a ghost is just the first of a series of disturbing secrets they slowly uncover. What led to the suicides? What became of the Axton House butler who fled shortly after his master died? What lurks in the garden maze and what does the basement vault keep? Even more troubling, what of the rumors in town about a mysterious yearly gathering at Axton House on the night of the winter solstice?
Told vividly through a series of journal entries, cryptic ciphers, recovered security footage, and letters to a distant Aunt Liza, Edgar Cantero has written an absorbing, kinetic and highly original supernatural adventure with classic horror elements that introduces readers to a deviously sly and powerful new voice.

EDGAR CANTERO is a writer and cartoonist from Barcelona working in Catalan, Spanish and English. He was born in 1981.