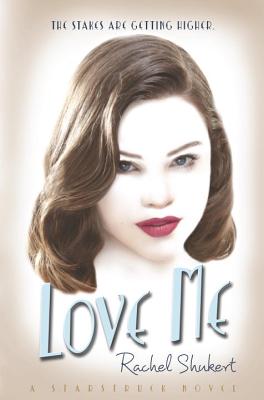 Love Me, indeed! Shukert's newest starts where Starstruck left off, following three young women caught up in the movie industry in the late 1930s. The second (and hopefully not last!) book in this addictive series showcases not only the glitter and glamour of the golden age of Hollywood, but the sordid underbelly as well. No one did excess as stylishly as the movie stars of yore, and Shukert lovingly describes each indulgence down to the last gold spangle and designer bugle bead. But it is not all fun and games—each of the girls finds herself trapped in the studio system and powerless against the powerful people in charge. Love Me is not just a book for teens, it is a lush, dramatic novel for anyone who loves Tinseltown!

Thegolden age of glam . . .
Amanda is heartbroken. She's tried, but she can't get over her breakup with hotshot writer Harry Gordon. If only she could talk to him, she could convince him that their love story is bigger than any screenplay. But Amanda isn't the only one in Hollywood keeping a secret Harry's got one too.
Margo has to pinch herself: there's talk of her getting an Oscar nom for her first film role, and she's living with "the" Dane Forrest, the gorgeous movie star millions including herself swoon over. But if the public finds out about their domestic arrangement, her career will be over. The studio has a plan to fix it all . . . but is Margo prepared to pay the price?
Gabby's drinking is out of control, but who cares? She's bored and depressed. She needs someone who will treat her like the woman she is beneath the silly stage costumes and pigtails. And she's sure unpredictable musician Eddie Sharp is The One. But playing with bad boys like Eddie isn't for little girls. . . .
"In this scintillating sequel to "Starstruck," the stakes are higher, the fights are cattier, and the drama soars sky-high . . . more twists and turns than Mulholland Drive. Secrets abound, and enough is held back to ensure that the next volume will have plenty left to reveal. This sizzling sequel definitely delivers the goods: think "Valley of the Dolls" meets "Gossip Girl.""--"Kirkus Reviews.

RACHEL SHUKERT has been fascinated by the Golden Age of Hollywood since she was a little girl, when she used to stay up all night watching old movies and fall asleep the next day at school. Rachel grew up in Omaha, Nebraska, and graduated from New York University. She is the author of "Everything Is Going to Be Great, Have You No Shame?, " and the Starstruck novels. She lives in Los Angeles with her husband.

Kirkus Reviews, December 15, 2013:
"Their interwoven narratives of Hollywood in the 1930s have more twists and turns than Mulholland Drive. Secrets abound, and enough is held back to ensure that the next volume will have plenty left to reveal. This sizzling sequel definitely delivers the goods: think Valley of the Dolls meets Gossip Girl."