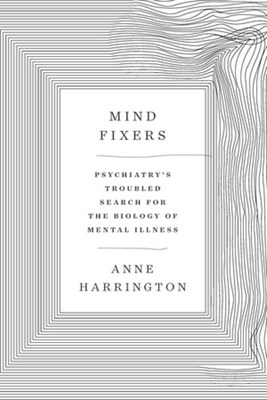 By Anne Harrington
Email or call for price
Out of Print

Mind Fixers tells the history of psychiatry’s quest to understand the biological basis of mental illness and asks where we need to go from here.

In Mind Fixers, Anne Harrington, author of The Cure Within, explores psychiatry’s repeatedly frustrated struggle to understand mental disorder in biomedical terms. She shows how the stalling of early twentieth century efforts in this direction allowed Freudians and social scientists to insist, with some justification, that they had better ways of analyzing and fixing minds.

Mind Fixers makes clear that psychiatry’s waxing and waning biological enthusiasms have been shaped not just by developments in the clinic and lab, but also by a surprising range of social factors, including immigration, warfare, grassroots activism, and assumptions about race and gender. Government programs designed to empty the state mental hospitals, acrid rivalries between different factions in the field, industry profit mongering, consumerism, and an uncritical media have all contributed to the story as well.

In focusing particularly on the search for the biological roots of schizophrenia, depression, and bipolar disorder, Harrington underscores the high human stakes for the millions of people who have sought medical answers for their mental suffering. This is not just a story about doctors and scientists, but about countless ordinary people and their loved ones.

A clear-eyed, evenhanded, and yet passionate tour de force, Mind Fixers recounts the past and present struggle to make mental illness a biological problem in order to lay the groundwork for creating a better future, both for those who suffer and for those whose job it is to care for them.

Anne Harrington is the Franklin L. Ford Professor of the History of Science and faculty dean of Pforzheimer House at Harvard University. She is the author of four books, including Mind Fixers and The Cure Within. She lives in Cambridge, Massachusetts.

A compelling story of the ongoing mission to understand and treat our troubled minds.
— Nina MacLaughlin - Boston Globe

Superb…nuanced…In Mind Fixers, Anne Harrington has written an excellent, engaging guide to what biological psychiatry has accomplished—and not accomplished—so far.

A tale of promising roads that turned out to be dead ends, of treatments that seemed miraculous in their day but barbaric in retrospect, of public-health policies that were born in hope but destined for disaster…Of value to historians of medicine.
— Gary Greenberg - Atlantic

Harrington’s grasp of this story and the clarity with which, with limited moralism, she delivers a tale about the ‘big picture’ of psychiatry and neurology is emblematic of the historian’s craft.
— Stephen T. Casper - Science

In Mind Fixers, Anne Harrington offers a provocative and enthralling account of psychiatry’s quest for the holy grail of a biological explanation of mental illness. A well-written, effectively substantiated and devastating story of a research enterprise that has gotten nowhere at great expense, with nonending hype and, in so doing, has weakened a profession that is clinically still useful and, like its patients, deserves much better.

— Elizabeth Lunbeck, author of The Americanization of Narcissism

Anne Harrington has written a lucid and compelling analysis of the travails of psychiatry as it has attempted to ground its understanding of mental illness in biology. She confronts the gaps between its aspirations and reality with fairness and even sympathy.
— Steven E. Hyman, director of the Stanley Center for Psychiatric Research

A fascinating and wide-ranging unpacking of the field.
— Booklist

A measured, insightful survey of the limits of contemporary treatment for mental illness.
— Kirkus Reviews

A must-read that will interest general readers and medical professionals alike.
— Library Journal

Anyone interested in mental health care’s history and future will appreciate this informative and rewarding survey.
— Publishers Weekly