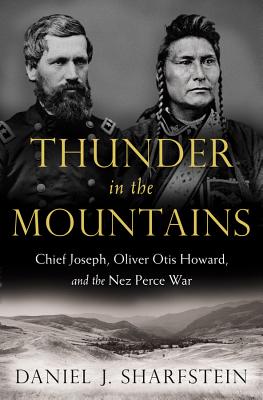 Since this book is part of the saga of Indians vs. Cowboys, I read it knowing my heart would be broken, and was not disappointed. Each of the main protagonists was his own kind of tragic figure: Chief Joseph of the Nez Perce tribe never stopped his tireless, ultimately fruitless advocacy for the return of his ancestral lands in northeast Oregon, petitioning officials in the Army, Congress and the White House, and General Oliver Otis Howard, a former Civil War commander, who had led unsuccessful Reconstruction efforts in the South. Of the two, Howard was the most misguided, by his rigid spirituality and the need to repair his broken reputation by forcing Native Americans out of their nomadic lifestyle and onto reservations where they would become docile Christian farmers. The author's style is to set these events into intriguing set pieces, so this is not dry history. — From Georgeann's Picks

The epic clash of two American legends—their brutal war and a battle of ideas that defined America after Reconstruction.

Oliver Otis Howard thought he was a man of destiny. Chosen to lead the Freedmen’s Bureau after the Civil War, the Union Army general was entrusted with the era’s most crucial task: helping millions of former slaves claim the rights of citizens. He was energized by the belief that abolition and Reconstruction, the country’s great struggles for liberty and equality, were God’s plan for himself and the nation. To honor his righteous commitment to a new American freedom, Howard University was named for him.

But as the nation’s politics curdled in the 1870s, General Howard exiled himself from Washington, D.C., rejoined the army, and was sent across the continent to command forces in the Pacific Northwest. Shattered by Reconstruction’s collapse, he assumed a new mission: forcing Native Americans to become Christian farmers on government reservations.

Howard’s plans for redemption in the West ran headlong into the resistance of Chief Joseph, a young Nez Perce leader in northeastern Oregon who refused to leave his ancestral land. Claiming equal rights for Native Americans, Joseph was determined to find his way to the center of American power and convince the government to acknowledge his people’s humanity and capacity for citizenship. Although his words echoed the very ideas about liberty and equality that Howard had championed during Reconstruction, in the summer of 1877 the general and his troops ruthlessly pursued hundreds of Nez Perce families through the stark and unforgiving Northern Rockies. An odyssey and a tragedy, their devastating war transfixed the nation and immortalized Chief Joseph as a hero to generations of Americans.

Recreating the Nez Perce War through the voices of its survivors, Daniel J. Sharfstein’s visionary history of the West casts Howard’s turn away from civil rights alongside the nation’s rejection of racial equality and embrace of empire. The conflict becomes a pivotal struggle over who gets to claim the American dream: a battle of ideas about the meaning of freedom and equality, the mechanics of American power, and the limits of what the government can and should do for its people. The war that Howard and Joseph fought is one that Americans continue to fight today.

Daniel J. Sharfstein is a professor of law and history at Vanderbilt University and a 2013 Guggenheim Fellow. His first book, The Invisible Line: A Secret History of Race in America, received the J. Anthony Lukas Prize. He lives in Nashville.

Magnificent and tragic....Sharfstein is a wonderful storyteller with a deep knowledge of all the relevant source material from the period. His narrative is rich with fascinating historical details.
— Nick Romeo - Christian Science Monitor

In his penetrating new book, Thunder in the Mountains, Daniel J. Sharfstein shows how the meaning of freedom was contested after the Civil War not only in the South but all the way to the Pacific Northwest....Sharfstein's account makes for absorbing reading; it adds immeasurably to our understanding of the complicated, interwoven lives of those who fought for 'progress' east and west.

One of the epic tales of American history, rendered by a master storyteller. Daniel Sharfstein breathes new life into the fascinating figures at the heart of the Nez Perce War.
— Karl Jacoby, author of The Strange Career of William Ellis: The Texas Slave Who Became a Mexican Millionaire

Daniel Sharfstein offers a searing account of an American tragedy: how Oliver Otis Howard, a champion for the rights of freed slaves, became an architect of the dispossession and subjugation of Native people. This beautifully written book will change the way readers think about the era of Civil War and Reconstruction.
— Ari Kelman, author of A Misplaced Massacre: Struggling Over the Memory of Sand Creek

Beautifully wrought and impossible to put down, Daniel Sharfstein’s Thunder in the Mountains chronicles with compassion and grace that resonant past we should never forget.

Revelatory and riveting.
— Gregory P. Downs, University of California–Davis, author of After Appomattox: Military Occupation and the Ends of War