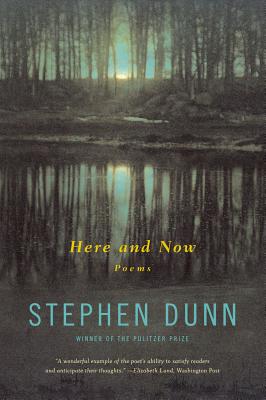 Stephen Dunn's language is exquisitely revealing of the mind and its workings. In Here and Now, he speaks with an honest tongue of a life of observation, contemplation and relationship--and of the life well-lived. It provoked me to read his words aloud--to experience their beauty and to more fully partake of his view of the world. Dunn has written and published 16 collections of poetry. Different Hours received the 2001 Pulitzer Prize for Poetry. In Here and Now, try Little Good Song (p. 71) or Bad (p. 87) for a taste of his imaginative fascination with life.

“A wonderful example of the poet’s ability to satisfy readers and anticipate their thoughts.”—Elizabeth Lund, Washington Post

In his sixteenth collection, Stephen Dunn continues to bring his imagination and intelligence to what Wallace Stevens calls “the problems of the normal,” which of course pervade most of our lives. The poem “Don’t Do That” opens with the lines: “It was bring-your-own if you wanted anything / hard, so I brought Johnnie Walker Red / along with some resentment I’d held in / for a few weeks.” In other poems, Dunn contemplates his own mortality, echoing Yeats—“That is no country for old men / cadenced everything I said”—only to discover he’s joined their ranks. In “The Writer of Nudes” his speaker is in search of the body’s “grammar” but tells his models, “Don’t expect to see yourself as other / than I see you.” Full of grace, wit, humor, and masterful precision, the poems in Here and Now attest to the contradictions we live with in the here and now. Political and metaphysical, these astonishing poems remind us of the essential human comedy of getting through each day.

from "The House on the Hill"

a large, welcoming house would emerge

made out of invention and surprise.

No things without ideas! you'd shout,

and the doors would open,

and the echoes would cascade down

to the valleys and the faraway towns.