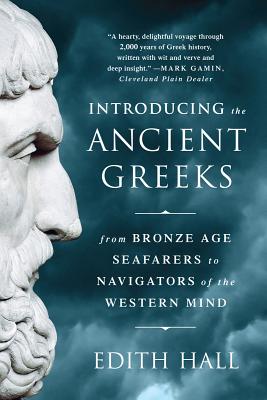 "Wonderful…a thoughtful discussion of what made [the Greeks] so important, in their own time and in ours." —Natalie Haynes, Independent

The ancient Greeks invented democracy, theater, rational science, and philosophy. They built the Parthenon and the Library of Alexandria. Yet this accomplished people never formed a single unified social or political identity. In Introducing the Ancient Greeks, acclaimed classics scholar Edith Hall offers a bold synthesis of the full 2,000 years of Hellenic history to show how the ancient Greeks were the right people, at the right time, to take up the baton of human progress. Hall portrays a uniquely rebellious, inquisitive, individualistic people whose ideas and creations continue to enthrall thinkers centuries after the Greek world was conquered by Rome. These are the Greeks as you’ve never seen them before.

Edith Hall is one of Britain’s foremost classicists, having held posts at the universities of Cambridge, Durham, Reading, and Oxford. She is the author and editor of more than a dozen works and now teaches at King’s College London.

In Edith Hall’s new and groundbreaking study of ancient Greek culture, society, and mentality over a millennium and more, from Agamemnon to Constantine, she acutely identifies and brilliantly explains why we simply cannot do without the ancient Greeks.
— Paul Cartledge, A. G. Leventis Professor of Greek Culture, University of Cambridge, and the author of The Greeks: A Portrait of Self and Others

Edith Hall’s characteristically original approach to the world of classical antiquity is on full display in this introductory survey of the ancient Greeks and their enduring accomplishments.
— Froma Zeitlin, Ewing Professor of Greek Language and Literature, emerita, Princeton University

In this vivacious and learned book, Edith Hall distills the essence of Hellenic culture to discover the secrets of its success and stamina. Filled with striking anecdotes and little-known facts, this book will delight any student of the ancient Greek world.
— Adrienne Mayor, Stanford University, and author of The Poison King

Introducing the Ancient Greeks is informative and inspiring. With deep expertise and unabashed enthusiasm, Edith Hall surveys the whole history of the ancient Greeks and pinpoints the shared traits that explain their enduring achievements.