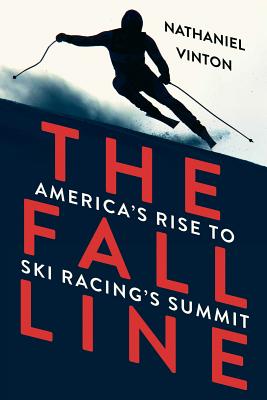 “Great sports writing. . . . [Vinton] is taking us inside a world few ever visit.”—James Hill, Washington Post

Harnessing nature’s most powerful forces, elite downhillers descend icy, rugged slopes at speeds cresting 90 miles per hour. For decades, American skiers struggled to match their European counterparts, and until this century the US Ski Team could not claim a lasting foothold on the roof of the Alps, where the sport’s legends are born.

Then came a fledgling class of American racers that disrupted the Alpine racing world order. Led by Bode Miller and Lindsey Vonn, Julia Mancuso and Ted Ligety, this band of iconoclasts made a place for their country on some of the world’s most prestigious race courses. Even as new technology amplified the sport’s inherent danger, the US Ski Team learned how to win, and they changed downhill racing forever.

The Fall Line is the story of how it all came together, a deeply reported reconstruction of ski racing’s most dramatic season. Drawing on more than a decade of research and candid interviews with some of the sport’s most elusive figures, award-winning journalist Nathaniel Vinton reveals the untold story of how skiers like Vonn and Miller, and their peers and rivals, fought for supremacy at the Olympic Winter Games.

Here is an authoritative portrait of a group of men and women taking mortal risks in a bid for sporting glory. A white-knuckled tour through skiing’s deep traditions and least-accessible locales, The Fall Line opens up the sexy, high-stakes world of downhill skiing—its career-ending crashes, million-dollar sponsorship deals, international intrigue, and showdowns with nature itself.

With views from the starting gate, the finish line, and treacherous turns in between, The Fall Line delivers the adrenaline of one of the world’s most beautiful and perilous sports alongside a panoramic view of skiing’s past, present, and future.

Nathaniel Vinton is a writer who covered sports for the New York Times, the International Herald Tribune, and many other publications. While an investigative reporter at the New York Daily News, he coauthored American Icon: The Fall of Roger Clemens and the Rise of Steroids in America's Pastime. A lifelong student of ski racing, he lives in New York with his wife and their children.

Mr. Vinton has stamped his cold feet by many a finish corral; he knows his racing history, and he quickly and deftly renders the supporting cast in this drama—the umlauted adversaries from the traditional ski kingdoms who challenge Mr. Miller and Ms. Vonn each week.
— Christopher Solomon - Wall Street Journal

Most of the world tunes into ski racing only every four years, and Vinton capitalizes on the opportunity to detail what happens in between, with so much more involved in the sport than just preparing for the Olympics.
— Kurt Kragthorpe - Salt Lake Tribune

[T]he finest book ever written about World Cup racing. . . . Worth reading for its portrayal of Bode Miller alone—as nuanced as Miller is complicated—it’s richly detailed and vivid throughout, informed by Vinton’s unrivaled behind-the-scenes access to the sport’s athletes, coaches, and peripheral players. His love of the sport and respect for the courage of its heroes shines through on every page. At last, American ski racing gets the book it deserves.
— Joe Cutts - Skiing

A classic study. . . . His turn-by-turn descriptions of the ways skiers win—or crash—in significant races are among the best you’ll find in the literature. The Fall Line is a must-read for ski racing fans..

Shines at making the sport’s finer points accessible. . . . You’re rooting for each skier that comes out of the starting gate.
— Amanda Ruggeri - Powder Magazine

Unfolds like an exhilarating downhill race. . . . As inside as an account can be of one of the most exciting seasons in American sports history.
— David Epstein, author of The Sports Gene: Inside the Science of Extraordinary Athletic Performance

A ripping, compulsively readable, deeply reported journey into the sporting world’s least-known subcultures. Nathaniel Vinton delivers the danger, the surprises, and the high-octane personalities that will take readers to the edge, and then past it.
— Daniel Coyle, New York Times best-selling author of The Secret Race and The Talent Code

May be the best book ever about the U.S. Ski Team and the highest levels of alpine ski competition. . . . Even if you don’t care about ski racing, you find yourself rooting for these athletes. And even if you know what happened, you find your pulse racing as you read about it.
— Skiracing.com

Nathaniel Vinton’s reporting skill and skiing expertise underpin this thrill ride with the US Ski Team. All the politics and drama around the making of a US dynasty are delivered with new insights and details on its daring—and sometimes rebellious—stars. You don’t know Bode Miller or Lindsey Vonn until you read The Fall Line.

A riveting, richly informed ride down the world’s most renowned ski slopes, chronicling the ascendance of American skiing and the outsized stars, Bode Miller and Lindsey Vonn, who epitomize it.
— Wayne Coffey, author of The Boys of Winter

Set against the backdrop of spectacular mountains, Vinton’s account combines history, biography, corporate politics, and environmental issues into a compelling narrative detailing the past and present of Alpine ski racing.
— Craig Clark - Booklist

A page turner that keeps you on the edge of your seat, wanting to know what’s next.
— John Laconte - Vail Daily

Well-reported and colorfully told. . . . Through it all, you hear Vinton’s heart beating, pounding actually. He loves ski-racing people, the places, the blinding magic of that elite snowy world. And, with that, you swim easily with his story as if carried on a current.
— Biddle Duke - Stowe Reporter