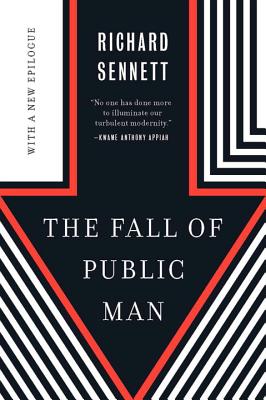 A landmark study of urban society, reissued for the 40th anniversary of the original publication with a new epilogue by the author.

A sweeping, farsighted study of the changing nature of public culture and urban society, The Fall of Public Man spans more than two centuries of Western sociopolitical evolution and investigates the causes of our declining involvement in political life. Richard Sennett’s insights into the danger of the cult of individualism remain thoroughly relevant to our world today. In a new epilogue, he extends his analysis to the new “public” realm of social media, questioning how public culture has fared since the digital revolution.

Richard Sennett’s books include The Corrosion of Character, Flesh and Stone, and Respect. He was the founding director of the New York Institute for the Humanities and now teaches sociology at New York University and at the London School of Economics.

A powerful argument for a more formal public culture and a swipe against the
rise of a self-indulgent counter-culture.
— Melissa Benn, - Guardian

Brilliant. . . . One admires the breadth of Professor Sennett’s erudition,
the reach of his historical imagination, the doggedness of his analysis.
— Christopher Lehmann-Haupt - New York Times