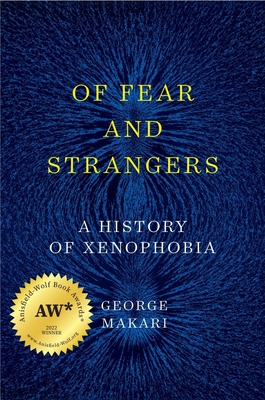 Winner of the Anisfield-Wolf Book Award

A Bloomberg Best Nonfiction Book of 2021

A startling work of historical sleuthing and synthesis, Of Fear and Strangers reveals the forgotten histories of xenophobia—and what they mean for us today.

By 2016, it was impossible to ignore an international resurgence of xenophobia. What had happened? Looking for clues, psychiatrist and historian George Makari started out in search of the idea’s origins. To his astonishment, he discovered an unfolding series of never-told stories. While a fear and hatred of strangers may be ancient, he found that the notion of a dangerous bias called "xenophobia" arose not so long ago.

Coined by late-nineteenth-century doctors and political commentators and popularized by an eccentric stenographer, xenophobia emerged alongside Western nationalism, colonialism, mass migration, and genocide. Makari chronicles the concept’s rise, from its popularization and perverse misuse to its spread as an ethical principle in the wake of a series of calamites that culminated in the Holocaust, and its sudden reappearance in the twenty-first century. He investigates xenophobia’s evolution through the writings of figures such as Joseph Conrad, Albert Camus, and Richard Wright, and innovators like Walter Lippmann, Sigmund Freud, Jean-Paul Sartre, Simone de Beauvoir, and Frantz Fanon. Weaving together history, philosophy, and psychology, Makari offers insights into varied, related ideas such as the conditioned response, the stereotype, projection, the Authoritarian Personality, the Other, and institutional bias.

Masterful, original, and elegantly written, Of Fear and Strangers offers us a unifying paradigm by which we might more clearly comprehend how irrational anxiety and contests over identity sweep up groups and lead to the dark headlines of division so prevalent today.

George Makari is a psychiatrist, historian, and author most recently of Soul Machine: The Invention of the Modern Mind. Director of the DeWitt Wallace Institute and professor of psychiatry at Weill Cornell Medical College, he lives in New York City.

Riveting....weaves together a fascinating if powerfully disturbing series of examples of stranger hatred (and exploitation) alongside the internal dissent such encounters have always prompted....Throughout his analysis, Makari brings an impressive range of reading to bear, wearing his learning lightly and interspersing fascinating capsule biographies of transformation figures like Raphael Lemkin, Carl Schmitt and Theodor Adorno with literary commentary on Aldous Huxley, Richard Wright and James Baldwin....All the material is enthralling.
— Thomas Chatterton Williams - New York Times Book Review

By shedding light on the trajectory of xenophobia during its 150-year history, this skillfully written account helps point us towards ways to combat it.
— Rachel Newcomb - Washington Post

With elegance and passionate conviction, George Makari deconstructs one of the ugliest problems of our time…With penetrating insight, he reveals the history of a grave weakness that is one of the wildest threats against coherent democracy and human kindness…Of Fear and Strangers is at once a work of dispassionate reporting and brave moral righteousness

— Andrew Solomon, author of Far from the Tree

With astonishing range and lucid erudition, George Makari has again given us an intellectual history that illustrates how little we know about the ideas that animate and rule our world…Breathtaking with its learnedness, dazzling as an easy-to-read narrative of complex ideas and knotty concepts…In an epoch where nations often appear cleaved into equally disdainful mobs, Makari makes an airtight case that an enhanced understanding of the concept ‘xenophobia’ can serve as a skeleton key that will help unlock many of the psychic terrors currently haunting our cognitive processes and social worlds.
— Anthony Walton, author of Mississippi: An American Journey

Drawing on philosophy, psychology, sociology, and other disciplines, George Makari's beautiful writing delivers a strikingly original history... A sheer delight to read, this book is a gift for all.
— Zia Haider Rahman, author of In the Light of What We Know