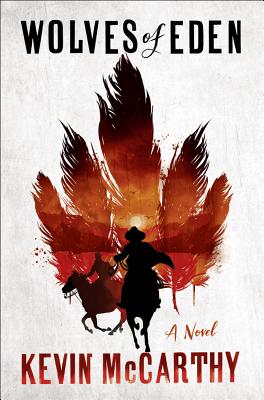 By Kevin McCarthy
$25.95
Not Available In-Store - Usually Ships from Warehouse in 1-5 Days

The Civil War may be over, but in this thrilling historical novel, the battle for the West is only just beginning.

Dakota Territory, 1866. Following the murders of a frontier fort’s politically connected sutler and his wife in their illicit off-post brothel, Lieutenant Martin Molloy and his long-suffering orderly, Corporal Daniel Kohn, are ordered to track down the killers and return with “boots for the gallows” to appease powerful figures in Washington. The men journey west to the distant outpost in a beautiful valley, where the soldiers inside the fort prove to be violently opposed to their investigations.

Meanwhile, Irish immigrant brothers Michael and Thomas O’Driscoll have returned from the brutal front lines of the Civil War. Unable to adapt to life as migrant farm laborers in peacetime Ohio, they reenlist in the army and are shipped to Fort Phil Kearny in the heart of the Powder River Valley. Here they are thrown into merciless combat with Red Cloud’s coalition of Native tribes fighting American expansion into their hunting grounds. Amidst the daily carnage, Thomas finds a love that will lead to a moment of violence as brutal as any they have witnessed in battle—a moment that will change their lives forever.

Blending intimate historical detail and emotional acuity, Wolves of Eden sets these four men on a deadly collision course in a haunting narrative that explores the cruelty of warfare and the resilience of the human spirit.

Kevin McCarthy is the author of the historical crime novels Irregulars and the acclaimed Peeler, which was selected by the Irish Times as one of its top ten thrillers of 2010. He lives in Dublin, Ireland.

Superbly detailed. …A brutal, blood-soaked and unsentimental account of the Old West that bears comparison with Cormac McCarthy’s Blood Meridian.

A fine amalgam of historical fiction, western, and thriller.
— Booklist

A strong entry in the modern western genre, encompassing both historical accuracy and social commentary, wrapped in a well-told story.
— Library Journal

Absorbing…. It's the well-drawn characters and riveting scenes that make this novel memorable.
— Kirkus Reviews

Kevin McCarthy is a fresh voice, and a keen one. This Irish thriller writer has ventured boldly into a new continent and a new history. His place is the American West in the 1860s, when the long, sad carnage was winding its grim way toward Wounded Knee. With this story of profound tragedy, his new readers will be many.
— Larry McMurtry, author of The Last Kind Words Saloon

When it comes to saturation-level historical authenticity—the sense of being there, alive and at large in the vanished past—I think Kevin McCarthy is in the company of masters like Patrick O’Brian and Hilary Mantel. Wolves of Eden is also a shiningly humane novel, all the more credible for being told by an Irish author, about the immigrant soldiers who found themselves on the front lines during the harrowing seizure of the American West.

— Stephen Harrigan, author of The Gates of the Alamo and A Friend of Mr. Lincoln

Kevin McCarthy shows himself to be an inspired explorer of history’s lost and forgotten causes. Wolves of Eden is a war story, mystery and elegy—thrilling, unflinching and finely observed.