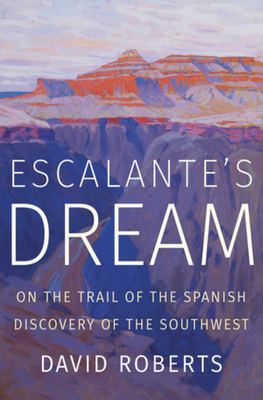 By David Roberts
$26.95
Not Available In-Store - Usually Ships from Warehouse in 1-5 Days

In July 1776 a pair of Franciscan friars, Francisco Atanasio Domínguez and Silvestre Vélez de Escalante, were charged by the governor of New Mexico with discovering a route across the unknown Southwest to the new Spanish colony in California. They had other goals as well, some of them secret: converting the indigenous natives along the way to the true faith, discovering a semi-mythical paradise known as Teguayó, hunting for sources of gold and silver, and paving the way for Spanish settlements from Santa Fe to Monterey.

In strict terms, the expedition failed. Running out of food and beset by an early winter, the twelve-man team gave up in what is now western Utah. The retreat to Santa Fe became an ordeal of survival. The men were reduced to eating their own horses while they searched for a crossing of the raging Colorado River in Glen Canyon. Seven months after setting out, Domínguez and Escalante staggered back to Santa Fe. Yet in the course of their 1,700-mile voyage, the explorers discovered more land unknown to Europeans than Lewis and Clark would encounter a quarter-century later.

Other writers, using Escalante’s brilliant and quirky diary as a guide, have retraced the expedition route, but David Roberts is the first to dig beneath its pages to question and ponder every turn of the team’s decision-making and motivation. Roberts weaves the personal and the historical narratives into a gripping journey of discovery through the magnificent American Southwest.

David Roberts is a climber and mountaineer and the author of thirty books about mountaineering, exploration, and anthropology. His books have won the Boardman Tasker Award for Mountain Literature, the Grand Prize at the Banff Mountain Book Competition, and been shortlisted for the PEN/ESPN Award for Literary Sports Writing. He lives in Massachusetts.

A luminous work of exploration, both personal and historical, written by one of my very favorite writers of the American Southwest. This is a piercingly beautiful and eloquent book.
— Douglas Preston, #1 New York Times best-selling author of The Lost City of the Monkey God and Cities of Gold

Superbly written, Escalante’s Dream is a multidirectional literary and historical exploration of the unknown American Southwest, transporting the reader through exhilarating discovery shadowed by mortality.

[A]n amiably discursive, often beguiling entry in what has become a venerable literary form: the expedition in pursuit of an expedition. Roberts knows his Southwestern history, and he knows how to craft an artful sentence.
— Philip Connors - New York Times Book Review