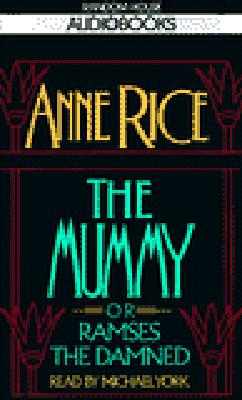 Anne Rice, bestselling author of The Vampire Chronicles, now delves into the mysterious legend of the mummy in this original and poetic tale of romance and horror.

It begins in the early 1900's when archaeologist Lawrence Stratford discovers a perfectly preserved mummy in a tomb in Cairo. Little does he know that the mummy, one Ramses the Great, a.k.a. Ramses the Damned, has consumed an extraordinary potion that makes him immortal; only the powerful rays of the sun are needed to bring him to life. Transported to London, the mummy dispenses with his wrap and takes on a human guise. As Reginald Ramsey, he immediately captures the heart of Stratford's daughter, Julie, who is privy to his unnatural secret but can't resist his stunning good looks. All goes well until Reginald comes across Cleopatra, his long-lost love, under glass in a museum. Unable to bear the sight of this once-glorious Queen now on gruesome display, he decides to bring her back to life...a decision he will live forever-to regret.

Michael York made his film debut in 1966 opposite Richard Burton and Elizabeth Taylor in Taming Of The Shrew. The well-known actor has since appeared in many movies, including Cabaret and Murder on the Orient Express. His extensive television credits include the CBS miniseries SPACE, an ABC After School Special Are You My Mother? for which he was nominated for an Emmy Award, and a series of guest appearance on CBS's Knots Landing.

Other Anne Rice titles available as Random House AudioBooks: Interview With The Vampire and The Queen Of The Damned