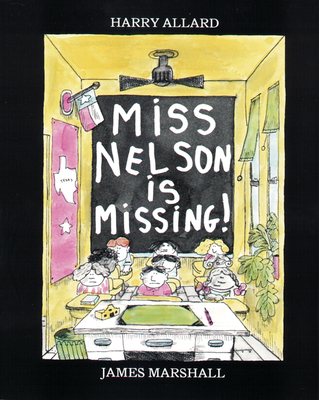 The kids in Room 207 were misbehaving again. Spitballs stuck to the ceiling. Paper planes whizzing through the air. They were the worst-behaved class in the whole school.

So begins this quirky classic, first published in 1977 and still relevant today as a lighthearted reminder to show our appreciation to those we value. The students don’t proffer a shred of respect for their good-natured teacher Miss Nelson, but when the witchy substitute Miss Viola Swamp appears on the scene, they start to regret their own wicked ways. James Marshall’s scritchy, cartoonish full-color ink and wash illustrations are hilarious. A back-to-school perennial!

Harry Allard (1928-2017) was the author of many hilarious books for children, including several Miss Nelson and Stupid Family titles, all illustrated by James Marshall.

James Marshall (1942–1992) created dozens of exuberant and captivating books for children, including The Stupids, Miss Nelson Is Missing!, and the ever-popular George and Martha books. Before creating his canon of classic, hilarious children’s books, James Marshall played the viola, studied French, and received a master’s degree from Trinity College. He also doodled. It was the doodles, and the unforgettable characters that emerged from them, that led him to his life’s work as one of the finest creators of children’s books of the twentieth century. In 2007, James Marshall was posthumously awarded the Laura Ingalls Wilder medal for his lasting contribution to literature for children.

"If all teachers looked as goofy as Mr. Marshall makes these two, the earth would never again have a truancy problem." — New York Times

"Rarely has the golden rule been so effectively interpreted for children." — Booklist