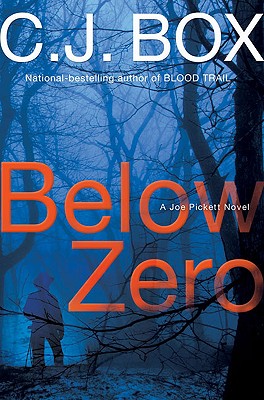 Below Zero begins with an unassuming phone message: "Tell Sherry April called." But Sherry-Joe Pickett's oldest daughter, Sheridan-and the Pickett family are shaken to the core. April, Pickett's foster daughter, was killed in a horrific murder and arson spree six years prior. To Joe, it doesn't seem even remotely possible that April could have survived the massacre described in Winterkill. He was there. But Sherry starts to believe there's a chance that April is still alive; the girl on the other end of the phone is able to recall family incidents that only April could know.

Joe, however, remains suspicious, especially when he discovers that the calls have been placed from locations where serious crimes have occurred.

At the same time, an older man and a much younger girl cross the country. The man is on a mission to repent for the crimes he's committed against the environment during his lifetime. He ultimately wants to offset each incident until he not only becomes carbon neutral, but actually drops below zero- as if he's never existed. As the path of these travelers starts to intersect with the Pickett family's, the question is raised: Is this young girl April-or are Joe and his family the victims of the cruelest of hoaxes?