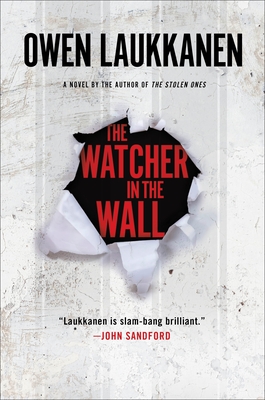 This is book number 5 in the A Stevens and Windermere Novel series.

A heart-pounding new Stevens and Windermere thriller from the award-winning author of The Stolen Ones and The Professionals.

Kirk Stevens and Carla Windermere of the joint BCA-FBI violent crime task force have handled shocking cases before, but this one is different. Stevens’s daughter, Andrea, is distraught over a classmate’s suicide, but what the two investigators find is even more disturbing—an online suicide club of unhappy teenagers, presided over by an anonymous presence who seems to be spurring them on. Soon, it becomes apparent that the classmate wasn’t the first victim—and won’t be the last, either, unless they can hunt down this psychopath once and for all.

Owen Laukkanen was born in Vancouver. After graduating from university in 2006, he answered an ad on Craigslist for a summer job at the World Series of Poker in Las Vegas as a “poker tournament reporter” for a poker website. At the end of the summer, they offered him a full-time job. You wouldn’t think you could make a living at this, but you would be wrong. For the next three years he traveled around the world, reporting from the most luxurious casinos of Monaco and Macau and Australia to the sketchiest card rooms of California and Atlantic City. In 2009, having seen his fill, Laukkanen quit to concentrate on fiction. He also spends summers as a deckhand on the boats of his father and his uncle, both commercial fishermen. He is at work on more novels.

His previous Stevens and Windermere novels are The Professionals, Criminal Enterprise, Kill Fee, and The Stolen Ones. The Professionals was nominated for the Barry Award and International Thriller Writers Award for best first novel, as well as the Spinetingler Award for Best Novel: New Voice. Criminal Enterprise was nominated for the ITW Award for best novel. Both books, as well as Kill Fee, appeared on several best-of-the-year lists.

Praise for The Watcher in the Wall

“[Laukkanen is] a talented painter of individual scenes…. Fans of Tess Gerritsen and Linda Castillo should make a note of this author’s name.” — USA Today

“Known for his powerful and suspenseful stories Laukkanen continues this pattern with his latest book. …This chilling story is gut wrenching. A word of warning make sure you have the time to read it because you will not want to put it down.”   — The Military Press

“The author's experiences give this novel psychological depth and an urgency that drives the book and its readers to a breathless conclusion.” — Milwaukee Journal Sentinel

“[An] eerily timely and poignant book …  It’s a true page-turner up to the final act, which quickly escalates into a fiery exchange of gunfire and action-packed pursuit of the perp.”— BookPage

“Owen Laukkanen knows which crimes and misdemeanors are too monstrous to be ignored.” — New York Times Book Review

“A gut-wrenching tale filled with empathy for alienated teens. This may be the best yet in a first-rate series.” — Kirkus, starred review

“This is a guaranteed lost weekend for Laukkanen’s fans and for anyone those
seeking a Lee Child–like adrenaline rush.” — Booklist

“Laukkanen’s best novel to date. I found this novel irresistible. If you haven’t already discovered Laukkanen’s Windermere-Stevens series, this is the book to start.” — The Globe and Mail

Praise for  The Stolen Ones

“From start to finish, The Stolen Ones is a fast-moving and satisfying thriller. Laukkanen is a first-class storyteller.” —Kirkus Reviews

“Laukkanen is gifted at creating relatable characters, and readers will happily tear through it. The combination of breakneck pacing, scarily plausible evils, and steadily rising stakes culminates in an explosive  finale.” —Booklist

“Fans of The Professionals will be delighted. Here it is not the criminals who are intriguing, but rather the victims who turn out to be far stronger and more remarkable than originally anticipated. Recommended for fans of well-written, thought-provoking thrillers.” —Library Journal

“Intense and fast-paced, with an intriguing storyline. An insightful look at morality and greed [in] an action-packed plot.” —Blackfive

“Here is my one-word review of The Stolen Ones: Whoa. Owen Laukkanen is rapidly becoming the king of the one-night reads. The Stolen Ones will make you a believer. You will also wonder why Laukkanen is not a household name in the constellation of thriller authors. Read this one (and his backlist) and spread the word. These books are amazing.”
—Bookreporter.com
My Account • Sign In • Sign Out • Register
NEW & USED BOOKS
AUTHOR EVENTS • GIFTS
Tempe
6428 South McClintock Drive
480.730.0205
[Google Map]
10am-7pm daily
Trade Counter 11am-6pm daily