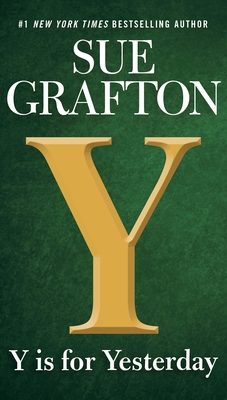 This is book number 25 in the A Kinsey Millhone Novel series.

Private investigator Kinsey Millhone confronts her darkest and most disturbing case in this #1 New York Times bestseller from Sue Grafton.

In 1979, four teenage boys from an elite private school sexually assault a fourteen-year-old classmate--and film the attack. Not long after, the tape goes missing and the suspected thief, a fellow classmate, is murdered. In the investigation that follows, one boy turns state's evidence and two of his peers are convicted. But the ringleader escapes without a trace.

Now it's 1989 and one of the perpetrators, Fritz McCabe, has been released from prison. Moody, unrepentant, and angry, he is a virtual prisoner of his ever-watchful parents--until a copy of the missing tape arrives with a ransom demand. That's when the McCabes call Kinsey Millhone for help. As she is drawn into their family drama, she keeps a watchful eye on Fritz. But he's not the only one being haunted by the past. A vicious sociopath with a grudge against Millhone may be leaving traces of himself for her to find...

Praise for Y is for Yesterday

“This will leave readers both relishing another masterful entry and ruing the near-end of this series. Prime Grafton.”—Booklist (starred review)

“Grafton once again proves herself a superb storyteller.”—Publishers Weekly

“The series may be coming to a close, but Grafton constructs an intricate plot following two time lines with at least a dozen characters in play while rarely slowing the pace.”—Library Journal

“The lively, engrossing...Grafton is in sure command of Kinsey’s wise-cracking but warm voice and of a many-layered plot that moves back and forth over events of a decade. Y Is For Yesterday might make you wish the alphabet had a few more letters.”—Tampa Bay Times-Review

“[Grafton’s] ability to give equal weight to the story of the detective and the detective story sets her apart in the world of crime fiction.”—Richmond Times-Dispatch