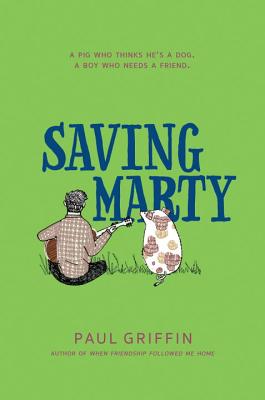 Lorenzo is a 12-year-old guitar-strumming, gentle soul. He lives on the family's failing peach farm and his dad died in the war just a week before he was born. Along with having a best friend whose more like a sister and a grandpa whose more like a friend, he bonds with and works to preserve a piglet runt--Marty--who quickly demonstrates he's smarter than most dogs. Author Paul Griffin keeps 'Renzo's actions and spoken words true to a shy, present-day preteen. It's the simple nuggets of wisdom and compassion in narrator Lorenzo's unspoken observations that made me close my eyes and smile so often. Along with laboring to save Marty, he managed to rescue and strengthen some of own faith in others. — From Jennifer's Picks

Fans of Because of Winn Dixie will adore this warm and heart-wrenching story of the friendship between a boy and a pig who thinks it's a dog.

Eleven-year-old Lorenzo Ventura knows heroes are rare—like his father, who died in the war, or his friend Paloma Lee, who fearlessly pursues her dream of being a famous musician. Renzo would never describe himself as a hero, but his chance comes when he adopts Marty, a runt piglet.

Marty is extraordinary—he thinks he’s a dog and acts like one too—and his bond with Renzo is truly one of a kind. At first, the family farm seems like the perfect home for Marty, but as he approaches 350 pounds, it becomes harder for Renzo to convince his mom that a giant pig makes a good pet. So when Marty causes a dangerous (and expensive) accident, Renzo knows Marty’s time is up. He’d do anything and everything for his best friend, but will everything be enough to save Marty?

Paul Griffin masterfully melds the heartrending and the hopeful in this unforgettable story about the power of friendship . . . and the unsung heroes all around us.

Paul Griffin is the award-winning author of When Friendship Followed Me Home, Ten Mile River, The Orange Houses, and Burning Blue. He lives, writes, and trains dogs in New York City.

"This moving story will appeal to readers who love realistic fiction with music, animals, and a dash of humor." — School Library Journal

"Griffin’s novelpacks a powerful punch...[and]captures a slice ofAmericana—the flyover farms of middle America—rarely depicted so sensitively in contemporary middlegradefiction. Hand this one to fans of animal-centered stories." — Booklist