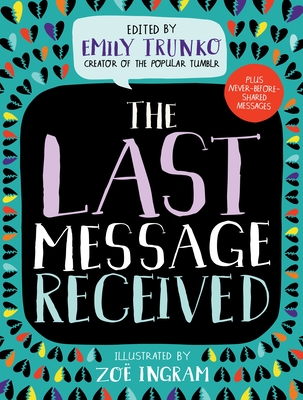 When I first stumbled across The Last Message Received tumblr, I spent hours reading through them, unable to stop myself. I still continue read the blog almost daily, and have even made a submission or two of my own. To me, there's something innately fascinating about these last messages. This book compiles messages from the blog, including those from loved ones that suddenly passed on, to exes that left, to friendships that ended out of nowhere. While many are heart-wrenching in their own right, this book is also comforting in a way. At least one (if not more) of these beautifully illustrated messages is sure to resonate with you.

Named one of the Top 10 Most Viral Blogs by Mashable, the Tumblr The Last Message Received—created by 16-year-old Emily Trunko—is now available as a gift book!

What if a message someone sends you today is the last you’ll ever receive from them? Would you respond differently, or even at all, if you knew that the end of a friendship, a brutal breakup, or worse might be coming, and that this might be your only chance?

"The emotional gravitas on display is not to be denied." —Kirkus

"Readers will return to this volume again and again, especially those in need of a bit of reassurance about the world." —SLJ


Praise for the Tumblr The Last Message Received

“The Last Message Received Tumblr will break your heart.” —Refinery 29

“Get some tissues. Scratch that. Get all the tissues.” —Cosmopolitan

“It’s moving to see that other people have been through similar situations, and let’s face it, we’ve all received messages that we can’t stop thinking about.” —Teen Vogue

Emily Trunko is an astonishing 16-year-old girl from the small town of Copley, Ohio. At age eleven, she started a book review blog called On Emily's Bookshelf, and at age fourteen she created The Clover Chain Project--dedicated to pairing up teens struggling with similar issues, which attracted local media attention. Emily created two Tumblr projects that became Internet sensations and books. Dear My Blank was inspired by her personal notebook of letters that she wrote but never intended to send. And The Last Message Received grew out of her curiosity about life-changing letters, notes, and texts that people have received. Emily continues to be fascinated by the way people connect through the written word.