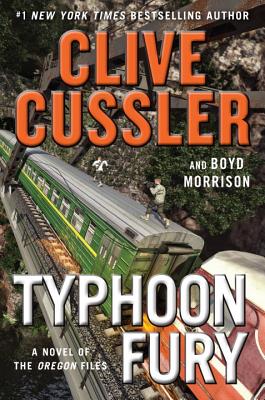 By Clive Cussler, Boyd Morrison
Email or call for price
Hard to Find

This is book number 12 in the The Oregon Files series.

Juan Cabrillo and the crew of the Oregon sail into a perfect storm of danger when they try to stop a new world war in this thrilling novel from the #1 New York Times-bestselling grand master of adventure.

Hired to search for a collection of paintings worth half a billion dollars, Juan Cabrillo and the crew of the Oregon soon find themselves in much deeper waters. The vicious leader of a Filipino insurgency is not only using them to finance his attacks, he has stumbled upon one of the most lethal secrets of World War II: a Japanese-developed drug, designed, but never used, to turn soldiers into super-warriors. To stop him, the Oregon must not only take on the rebel commander, but a South African mercenary intent on getting his own hands on the drug, a massive swarm of torpedo drones targeting the U.S. Navy, an approaching megastorm, and, just possibly, a war that could envelop the entire Asian continent.

“Cussler and Morrison take readers to the edge, at a pace so fast, you may find yourself needing oxygen.”—Suspense Magazine

Clive Cussler is the author or coauthor of more than 50 previous books in five best-selling series, including Dirk Pitt, NUMA Files, Oregon Files, Isaac Bell, and Sam and Remi Fargo. His nonfiction works include Built for Adventure: The Classic Automobiles of Clive Cussler and Dirk Pitt, plus The Sea Hunters and The Sea Hunters II. They describe the true adventures of the real NUMA, which, led by Cussler, searches for lost ships of historic significance. With his crew of volunteers, Cussler has discovered more than 60 ships, including the long lost Confederate ship Hunley. He lives in Arizona.

Boyd Morrison is the coauthor with Cussler of the Oregon Files novels Piranha and The Emperor's Revenge, and the author of six other books. He is also an actor and engineer, with a doctorate in engineering from Virginia Tech, who has worked on NASA's space station project at Johnson Space Center and developed several patents at Thomson/RCA. In 2003, he fulfilled a lifelong dream by becoming a Jeopardy! champion. He lives in Seattle.

“Villainy on land, sea, and air – what more could an adventure fan ask for? Juan Cabrillo and his elite crew of the ship Oregon fight their most ruthless villain yet.”—Associated Press