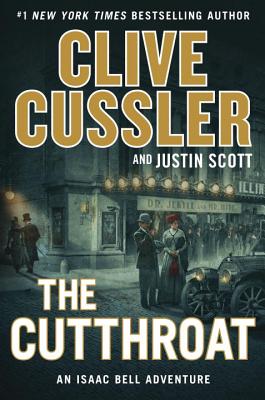 By Clive Cussler, Justin Scott
Email or call for price
Hard to Find

This is book number 10 in the An Isaac Bell Adventure series.

Isaac Bell may be on the hunt for the greatest monster of all time in this riveting action-adventure novel from #1 New York Times–bestselling author Clive Cussler.

The year is 1911. Chief Investigator Isaac Bell of the Van Dorn Detective Agency has had many extraordinary cases before. But none quite like this.

Hired to find a young woman named Anna Pape who ran away from home to become an actress, Bell gets a shock when her murdered body turns up instead. Vowing to bring the killer to justice, he begins a manhunt which leads him into increasingly more alarming territory. Anna Pape was not alone in her fate—petite young blond women like Anna are being murdered in cities across America.

And the pattern goes beyond the physical resemblance of the victims—there are disturbing familiarities about the killings themselves that send a chill through even a man as experienced with evil as Bell. If he is right about his fears, then he is on the trail of one of the greatest monsters of his time.

Clive Cussler is the author of more than fifty books in five bestselling series, including Dirk Pitt, NUMA Files, Oregon Files, Isaac Bell, and Fargo. His life nearly parallels that of his hero Dirk Pitt. Whether searching for lost aircraft or leading expeditions to find famous shipwrecks, he and his NUMA crew of volunteers have discovered more than seventy-five lost ships of historic significance, including the long-lost Confederate submarine Hunley, which was raised in 2000 with much press publicity. Like Pitt, Cussler collects classic automobiles. His collection features more than eighty examples of custom coachwork. Cussler lives in Arizona and Colorado.

Justin Scott is the author of thirty-one novels, including The Shipkiller and Normandie Triangle; the Ben Abbott detective series; six thrillers under his pen name Paul Garrison; and his coauthorship with Cussler of The Wrecker, The Spy, The Race, The Thief, The Striker, The Bootlegger, The Assassin, The Gangster, and The Cutthroat. Scott lives in Connecticut.

Praise for the Isaac Bell Novels

“Cussler and Scott have written another wonderful page-turner. This is historical action-adventure fiction at its rip-roaring best!”—Library Journal (starred review)

“As always in this series, the novel is very exciting, with excellent pacing and some very well-drawn characters. Cussler is a perennial A-lister, popularity-wise, and his Isaac Bell novels are the pick of his prodigious litter.”—Booklist

“The Isaac Bell series is a fun jaunt into America’s past and the books are a wonderful examination of life in the early twentieth century.”—Associated Press