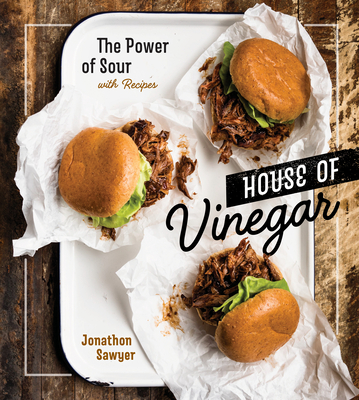 An exploration of the acid bite of vinegar and how it influences and elevates all aspects of cooking, from a James Beard Award-winning chef and vinegar evangelist Jonathon Sawyer, with 80 recipes for vinegars and dishes that use them.

From owning a Bon Appétit Best New Restaurant to being a Food & Wine Best New Chef to winning a James Beard award, Jonathon Sawyer has earned almost every food world accolade. In House of Vinegar, his fascinating and compelling chef's take on using vinegar, he utilizes acid to revolutionize dishes by enhancing and balancing flavor. Starting with the history of vinegar, he describes how to make your own vinegars at home, followed by preparations for use in vinaigrettes, sauces, marinades, braises, desserts, and even drinks--dishes like Monday Night Pork Chop with Salsa Verde, Smoky Peach Confit Chicken Wings, Sea Scallop Ceviche, and Olive Oil and Vinegar Gelato. With his unique and engaging voice, Sawyer helps professionals and home cooks alike understand how to channel the power of sour.

Chef JONATHON SAWYER is a proud Clevelander and a graduate of the Pennsylvania Institute of Culinary Arts. He began his culinary career at The Biltmore Hotel in Miami before working in New York City alongside Charlie Palmer at Kitchen 22. Sawyer later became Michael Symon's executive chef at Parea. In 2007 he moved back to Cleveland and opened four restaurants: Greenhouse Tavern, Trentina, Noodlecat, and Street Frites. He also runs a vinegar company, Tavern Vinegar, which has been featured in Tasting Table and Eater. He has won the James Beard Award for Best Chef Midwest, Food & Wine's Best New Chef, and Bon Appetit's Best New Restaurant.

"Several great vinegar books have been released in recent years, but you may want to consideradding this one to your shelves, if you, like Jonathon Sawyer, are tired of the commerciallyproduced, caramel-colored vinegars that are most widely available. These days, Sawyer brewsenough of the sour stuff to fully supply his group of Cleveland restaurants—and have extra left tosell. Perhaps the most interesting recipes are for untraditional vinegars, like one made with peatyScotch diluted with prosciutto broth, though a large portion of the book focuses on how to make use of good vinegar once you’ve got it, including creative drinks and desserts."
- PLATE MAGAZINE
My Account • Sign In • Sign Out • Register
NEW & USED BOOKS
AUTHOR EVENTS • GIFTS
Tempe
6428 South McClintock Drive
480.730.0205
[Google Map]
10am-7pm daily
Trade Counter 11am-6pm daily