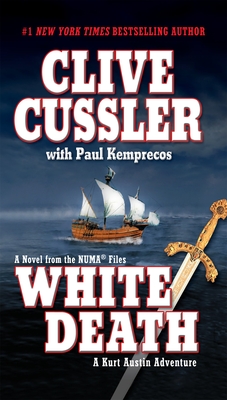 This is book number 4 in the The NUMA Files series.

Hailed as a hero for the new millennium, NUMA leader Kurt Austin must protect the seas’ delicate ecosystem from a fish-farming organization with big plans for their genetically-modified product in this #1 New York Times-bestselling adventure series.

A confrontation between a radical environmentalist group and a Danish cruiser leave many survivors trapped inside a sunken ship. But when the head of NUMA Special Assignments, Kurt Austin, and his colleague, Joe Zavala, are enlisted to run the rescue operation, they uncover a far more sinister agenda on the part of the supposed environmental group. Their agency, Sentinels of the Sea, is connected to a shadowy multinational corporation with plans for controlling the world’s oceans. And somebody within the company is willing to kill anyone who gets in the way.

When Austin narrowly escapes an explosion on his own boat, he becomes certain he’s the next target. This can only mean he’s onto something big. In fact, he’s in the midst of an environmental disaster that has already begun, and only he and NUMA® stand in the way….

Clive Cussler is the author or coauthor of over fifty previous books in five bestselling series, including Dirk Pitt®, NUMA® Files, Oregon® Files, Isaac Bell, and Sam and Remi Fargo. His nonfiction works include Built for Adventure: The Classic Automobiles of Clive Cussler and Dirk Pitt, and Built to Thrill:More Classic Automobiles from Clive Cussler and Dirk Pitt, plus The Sea Huntersand The Sea Hunters II; these describe the true adventures of the real NUMA, which, led by Cussler, searches for lost ships of historic significance. With his crew of volunteers, Cussler has discovered more than sixty ships, including the long-lost Confederate ship Hunley. He lives in Colorado and Arizona.

Paul Kemprecos has coauthored all five previous NUMA Files novels with Cussler and is a Shamus Award-winning author of six underwater detective thrillers.