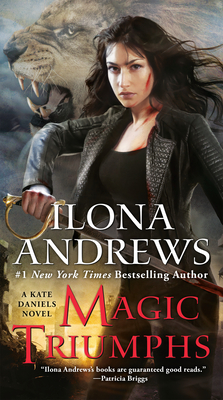 This is book number 10 in the Kate Daniels series.

Mercenary Kate Daniels must risk all to protect everything she holds dear in this epic, can't-miss entry in the thrilling #1 New York Times bestselling urban-fantasy series.

Kate has come a long way from her origins as a loner taking care of paranormal problems in post-Shift Atlanta. She's made friends and enemies. She's found love and started a family with Curran Lennart, the former Beast Lord. But her magic is too strong for the power players of the world to let her be.

Kate and her father, Roland, currently have an uneasy truce, but when he starts testing her defenses again, she knows that sooner or later a confrontation is inevitable. The Witch Oracle has begun seeing visions of blood, fire, and human bones. And when a mysterious box is delivered to Kate's doorstep, a threat of war from the ancient enemy who nearly destroyed her family, she knows her time is up.

Kate Daniels sees no other choice but to combine forces with the unlikeliest of allies. She knows betrayal is inevitable. She knows she may not survive the coming battle. But she has to try.

Ilona Andrews is the pseudonym for a husband-and-wife writing team. Together they are the coauthors of the #1 New York Times bestselling Kate Daniels urban-fantasy series and the romantic urban-fantasy novels of the Edge.

“A triumph on every level and a book readers won't soon forget! Andrews is truly a phenomenal storyteller!”—RT Book Reviews

“Kate is a great kick-ass heroine.”—Locus

“One of the brightest voices in urban fantasy...Ilona Andrews delivers only the best.”—Jeaniene Frost, New York Times bestselling author

“One of the best urban fantasy series ever written!”—RT Book Reviews

“Urban fantasy absolutely does not get much better than this.”—SF Signal

“I can’t think of another series so consistent, so well written, so full of wit and action and drama that always manages to give me exactly what I’m needing.”—Fiction Vixen
My Account • Sign In • Sign Out • Register
NEW & USED BOOKS
AUTHOR EVENTS • GIFTS
Tempe
6428 South McClintock Drive
480.730.0205
[Google Map]
10am-7pm daily
Trade Counter 11am-6pm daily