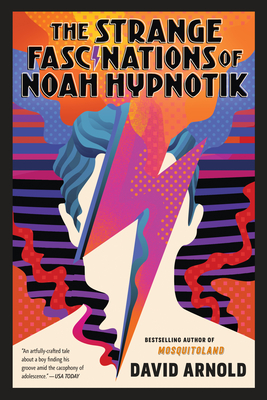 
What would happen if the small details of your life--your best friend's favorite movie, your dog's personality, your neighbor's daily walking path--suddenly changed? This is what happens to Noah after a strange encounter with a hypnotist at a friend's party. Deftly written and quietly intelligent, Noah Hypnotik is a book that will keep you guessing what's real and what isn't until the very last page. And even after, you'll continue to ponder the nature of reality! — From Anna's Picks

"As he did in his fantastic debut Mosquitoland, David Arnold again shows a knack for getting into the mind of an eccentric teenager in clever, poignant fashion." —USA Today

Then Noah → gets hypnotized.

Now Noah → sees changes: his mother has a scar on her face that wasn’t there before; his old dog, who once walked with a limp, is suddenly lithe; his best friend, a lifelong DC Comics disciple, now rotates in the Marvel universe. Subtle behaviors, bits of history, plans for the future—everything in Noah’s world has been rewritten. Everything except his Strange Fascinations . . .

A stunning surrealist portrait, The Strange Fascinations of Noah Hypnotik is a story about all the ways we hurt our friends without knowing it, and all the ways they stick around to save us.

David Arnold is the New York Times bestselling author of The Electric Kingdom, Mosquitoland, Kids of Appetite, and The Strange Fascinations of Noah Hypnotik, which has been optioned for film by Paramount. He has won the Southern Book Prize and the Great Lakes Book Award, and was named a Publishers Weekly Flying Start for his debut. His books have been translated into over a dozen languages. He lives in Lexington, Kentucky, with his wife and son.

"As he did in his fantastic debut Mosquitoland, David Arnold again shows a knack for getting into the mind of an eccentric teenager in clever, poignant fashion . . . An artfully crafted tale about a boy finding his groove amid the cacophony of adolescence." —USA Today

"Shivery and vaguely psychedelic . . . This is the kind of book that will appeal strongly to teenagers like Noah who are just starting to think about what they want from their futures, but it’s also immensely enjoyable to read as an adult. It’s a funny, eerie, beautifully textured book, a strange fascination in and of itself." —Vox

"Don't just pick this one up for its brilliantly bright cover. This book is equal parts odd, imaginative, and insightful." —BuzzFeed

"A surreal, memorable examination of how our relationships can both hurt and ultimately save us." —Teen Vogue

"The Strange Fascinations of Noah Hypnotik is an epic wonder that only David Arnold could have dreamed up. You'll marvel at every glowing page as powerhouse Arnold tells a blazing, transporting story of love and history and mystery and more.” —Adam Silvera, New York Times bestselling author of More Happy Than Not and They Both Die at the End

"A breathtaking, mind-bending tour de force that probes fate and forgiveness, history of the human connection, and what it means to live. Ambitious, wise, hilarious, and yearning, The Strange Fascinations of Noah Hypnotik is David Arnold at his exuberant best." —Kelly Loy Gilbert, author of Picture Us in the Light and Morris Award finalist Conviction

★ "Arnold has written an in-your-face validation of the power of real and honest friendship, guaranteed to mesmerize readers and leave them altered." —Booklist, starred review

★ "This is a comedic coming-of-age tale with plenty of pop culture and literary references and the snarky, casual, and observational feel of a mumblecore comedy. Supporting characters are fully fleshed out and hilarious. A weird, compelling teen-angst trip that will appeal to fans of John Corey Whaley." —School Library Journal, starred review

"An incredible, eye-opening read . . . Arnold’s characters shine in their realistic relationships and in their relatable fears and shortcomings. Be ready for a game changer of a novel—and a lot of reflection." —Romantic Times

"Boom! That's the sound of your mind exploding when you listen to this audiobook." —AudioFile, Earphones Award Winner

"Singular and brainy and deeply intriguing, with an ending that devastates . . . The book’s shattering payoff takes a primary rule of storytelling and busts through it like Kool-Aid Man, and the results are electrifying." —B&N Teen Blog

"Arnold’s characters are seeking higher meaning but he manages to keep the story from drifting into the esoteric by creating moments of true tenderness. Noah’s own writing and his internal exploration propel the narrative forward, allowing Arnold to explore the stagnancy of a predetermined path and unanswered questions about reality, interpretation, and imagination." —Publishers Weekly