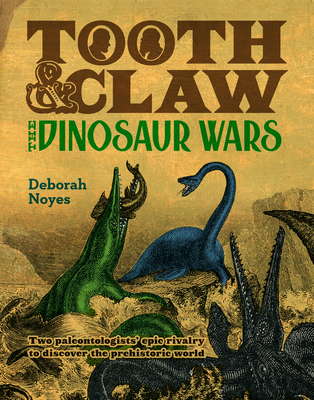 The tale of the epic rivalry between two foundational paleontologists to find bigger and better bones in the American West, perfect for readers of Steve Sheinkin and Candace Fleming.

Today we take for granted the idea that dinosaurs once roamed the earth. But two hundred years ago, the very concept of an extinct species did not exist. When an English scientist proposed in 1841 that Dino Saurs ("terrible lizards") had come and gone, it was only a theory, a new way of explaining the "dragon" and "giant" bones scattered across the globe. But when proof turned up seventeen years later, it was not only incontrovertible; it was massive.

Tooth and Claw tells the story of the feverish race between two brilliant, driven, and insanely competitive scientists--Edward Drinker Cope and Othniel Charles Marsh--to uncover more and more monstrous fossils in the newly opened Wild West. Between them, they discovered dozens of major dinosaur species and established the new discipline of paleontology in America. But their bitter thirty-year rivalry--a "war" waged on wild plains and mountains, in tabloid newsprint, and in Congress--dramatically wrecked their professional and private lives even as it brought alive for the public a vanished prehistoric world.

Deborah Noyes is the author of nonfiction and fiction for young readers and adults, including The Magician and the Spirits, Ten Days a Madwoman, Encyclopedia of the End, One Kingdom, and The Ghosts of Kerfol. She has also compiled and edited the short story anthologies Gothic!, The Restless Dead, and Sideshow. You can learn more at deborahnoyes.com and follow her on Twitter @DeborahNoyes.
My Account • Sign In • Sign Out • Register
NEW & USED BOOKS
AUTHOR EVENTS • GIFTS
Tempe
6428 South McClintock Drive
480.730.0205
[Google Map]
10am-7pm daily
Trade Counter 11am-6pm daily